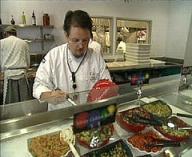 We’ve been trying to chase down this rumor (with colleague Nicole Wong) for the past several days, and Google has finally confirmed it: Chef Charlie Ayers, who made the Google cafeteria famous worldwide, is leaving. Ayers’ last day is Monday, and there’s an employee send-off planned for Friday. Ayers is heading to Chicago to pick up an award and was not available to comment. Ayers’ free cafeteria became famous throughout the valley for its top-rate food. (The Merc wrote about valley workplace food options here and ranked Google tops among local company eateries.) In fact, friends of Googlers would often try to finagle lunch dates just so they could eat there. No word on where Ayers is headed. But the former Grateful Dead chef presumably has enough Google stock options to open up many possibilities.

UPDATE: Turns out Ayers has hired a PR person (a sometime writer for the Santa Rosa Press Democrat) and plans to open a chain of healthy food restaurants in the valley.