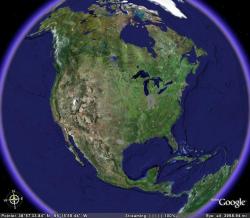 We took our own advice, and played with Google Earth. Mistake, we’ve just spent an hour or so tripping all over. Our conclusion: Download it now. We’ll try to hold back on sappy enthusiasm, but…this is awesome!

Matt did it it, and it took two minutes. First, he asked for directions — complete with full satellite images — to his home in Fremont, and then directed himself along the trail he jogs to Mission Peak in Fremont. As if on a flying carpet (there’s a console, and you just use the mouse to direct you), he followed the trail to the peak, watching Google track his elevation, from 400 feet to 2,400 feet. 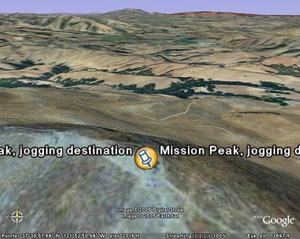 Picture at left is Google Earth’s image of the peak (reduced version). Google lets you put a marker at the peak, for future reference and notes. It lets you tilt the axis of the satellite, letting Matt notice for the first time how steep part of the trail was (there’s about a 1,300 ft or so drop just about 200 feet or so to his right). Elevation reading in the picture at left is too small too see, but it’s at the bottom. 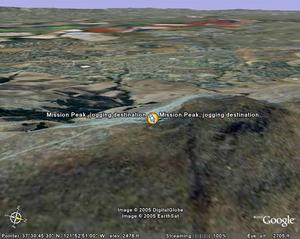 Google also lets you rotate the satellite map, so you can see the Bay side from this view (see picture on left, although the graphics show the Bay as a red sheen here). And it looks as though you can send an email with a file of the trail. If the recipient has the software installed, they can start flying themselves from that point, and so on. Anyway, this is going to be real cool. It’s just the beginning of possibilities. More info? Here’s a nice concise description of the features from SEW.