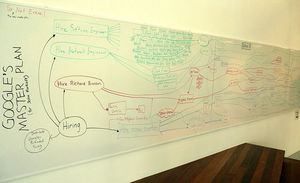 It’s known that Steve Jurvetson, the venture capitalist at Silicon Valley firm Draper Fisher Jurvetson, is a bit “out there” in his musings. Just read his blog. And it’s also known he’s had Google co-founders Larry Page and Sergey Brin over to his house for dinner for futuristic discussions about space and nanotechnology (it was over one such dinner that Page and Brin broached the idea of creating a nanotech lab at Google). He has invested alongside Google into companies like Baidu. So he’s got a pretty good idea about what goes on over at Google. Check out these pictures lodged on Jurveston’s flickr account. Be sure to enlarge image and check out the other frames, and see where Google eliminates all evil.