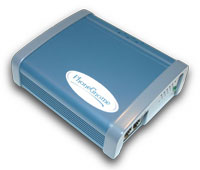 Behold the latest Silicon Valley invention, something called the PhoneGnome.

Om Malik first pointed us to it in his post here, and has a more detailed description. This could be big, if it lives up to its promise. It melds the Internet with your regular phone, using a simplicity that looks oh so sweet. Basically, it fuses Voice over Internet Protocol (VoIP) communications with a customer’s existing Public Switched Telephone Network (PSTN) service.

Here’s a simple descripton of how it works:

You purchase a PhoneGnome, plug it into your phone line (wall jack), plug your standard touchtone telephone into your PhoneGnome, and connect the PhoneGnome to an available port on your broadband router. It is different from other services because there is no monthly fee (it’s a one-time purchase of $119). Of course, like Skype, the PhoneGnome requires the person you’re calling to have a VoIP connection too, for calls to be absolutely free. Like Skype, it offers cheap rates if you do call people who aren’t hooked up. It is different from Skype and others because you use your ordinary phone, can still use the same phone over the regular phone network if power goes out or you need to dial 911, and because it uses Session Initiation Protocol, an open standard, so the company says you can place calls to and receive calls from millions of other people using SIP-compatible products.

Still, the company that builds it, TeleEvolution, realizes the vast majority of phone users still don’t, so it needs to spark a viral campaign. Thus it is paying you $30 every time you refer someone else to buy the PhoneGnome — apparently with no limit.

As Om points out, it is run by David Beckemeyer, co-founder of Earthlink, and Joi Ito and Linked Inï¿½s Reid Hoffman are investors and advisors.

Note: While we’re referencing Om, note his curious tale of the two Verseons, at least one of which is a Milpitas company doing grid-computing based drug discovery.