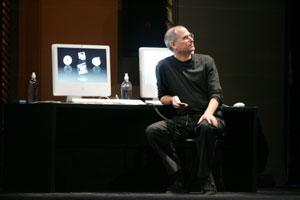 Here’s a good summary from the NYT (reg required) of all the details you’ll need on Apple CEO Steve Jobs’ presentation of the video iPod yesterday.

It is noteworthy that Disney is Apple’s first partner for selling video content for the iPod. Disney has had its fair share of friction with Jobs and his “Rip, Mix, Burn” campaign, and with Pixar, Jobs’ other company. And, as TechDirt also notes, ABC’s affiliates had a bit of surprise about plans by Disney to have its shows offered via the iPod on the cheap.

Already Disney is facing its first set of problems over the deal. Apparently, no one thought to tell local ABC affiliates about the plans to offer the shows online and the affiliates are pissed, saying it will erode ratings and people won’t watch on TV any more. That may or may not be true. After all, it will also help bring new people to the show, and keep those interested who missed an episode or two along the way.

But here’s a Merc story (free registration), which outlines some of the cool downloads available for those who’d…

…love to watch TV on the go:

Apple Computer and Walt Disney announced Wednesday that the new iPod would offer episodes of ABC’s biggest hits, “Desperate Housewives” and “Lost,” as well as the new “Night Stalker” the day after they air. The episodes, along with installments of the Disney Channel’s “That’s So Raven” and “The Suite Life of Zack & Cody,” would cost $1.99 to download and could be played on the iPod’s 2 1/2-inch screen, a computer or even on a standard TV.

While the Apple-Disney deal caught executives at other networks somewhat by surprise, the idea that one of the networks would take the leap was hardly a shock. In fact, the networks have already been dipping their corporate toes into the waters of new technology,

UPN recently streamed an episode of its new hit, “Everybody Hates Chris,” on Google. The WB offered the opening episode of “Supernatural” on Yahoo before the series premiered in September; Showtime did the same with its new series, “Fat Actress.” The Sci Fi cable channel has offered complete installments of “Battlestar Galactica” on its own Web site. And ABC News has a deal with Verizon Wireless to deliver news report via cell phones.