The notable $11 million investment in blog and web-site hosting company FreeWebs today made us scratch our head a bit.

We wrote about the investment in our “wire” section (left-hand side of our homepage), and mentioned there are many competitors to FreeWebs, several of them quite large. Why would a company of a dozen or so employees, which managed to bootstrap it for so long (they went without funding for five years) and which is now profitable and has 11 million registered users, suddenly go out and raise a lot of cash. Why now?

Turns out, there’s a lot of logic to this. FreeWebs has labored away, with a very low burn-rate, and it has seen millions of users join up to get the free Web sites if offers. It has proven its usefulness. And now, it is ready to leverage that platform to try to make serious money. Its ability to make a bundle more money is still unproven, though. It also needs to hire a lot more talent to get the implement the job with experienced, competent sales, marketing and product managers. The combination of risk and need for capital, then, is why it is a great time to raise venture capital.

Or at least that’s the recipe that Peter Fenton, venture capitalist at Benchmark Capital, said is what guides his firm. He’s made good money, via his investments in JBoss and Wily. He didn’t invest in FreeWebs, but explained his approach to us a few weeks ago.

In the diagram above (or if it is too small, click on diagram below and see p.3 of Fenton’s PDF file), note that the ideal time for the Series A, or first round of venture capital, is right before the company’s rising “adoption” curve (and thus value of a company) meets the declining “risk” curve. The need to wait long enough before the VC round can be forgotten, especially in bubbly times such as these — when VCs seem to be throwing money hastily on any idea they see. Indeed, it is remarkable that FreeWebs went as long as it did without getting capital. 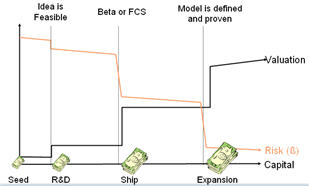 Fenton’s model differs from the more traditional VC “farm raised” model (see diagram here), when a venture firm invests in a company at pre-defined stages — for example, when a company finishes its prototype, ships its product, etc. That model, popular for Silicon Valley’s software start-ups, should be thrown out, he said. Take the software industry. With the advent of open-source, software start-ups with useful products can pitch their early test versions to developers working for large companies (potential customers). If those developers like the product, the developers can evangelize for the software internally, and sales and testing can progress without huge marketing budgets. If the product gets adopted, it makes sense for the company to raise venture capital to expand.

Fenton backed JBoss, an open-source software company, which shipped its first product within six months of launching, and went without venture capital for a long time. “It was living on fumes,” explains Fenton. But that was a good thing. By starving through its early years, JBoss took time to experiment, a luxury afforded it by having no investors impatient for a return. Fenton invested much later, after the company already had 6 million downloads — but before it had made real traction with support contracts. “The challenge is to identify the acceleration/adoption phase before it’s obvious,” says Fenton. Indeed, Fenton’s firm — then Accel — was handsomely rewarded, and quickly too, when JBoss was sold in April for $350 million.

Back to FreeWebs. Its adoption has been considerable, but success of its more ambitious services is far from obvious. Like Six Apart, it is buying up companies to expand its offerings. FreeWebs just bought Mad4Milk.net, creator of Mooglets widgets for its “Farms” site and an expanding library of widgets. Although it’s too early to tell how FreeWebs will do, it did well by waiting and instilling a culture of frugality. Now with $11 million in capital, it has a rocket-engine, and this could be fun to watch. As mentioned, they’ve already opened an office in Silicon Valley.