Back in July, we mentioned that Microsoft was working on a YouTube clone.

Tomorrow it will be unveiled, according to Microsoft employee Kurt Shintaku, who doesn’t seem to know whether to call it by its internal codename “Warhol,” or its more boring official name “MSN Soapbox.”

I’ve been working with Warhol for the past couple of months and I really like it. It’s a glitzier version of Putfile that only uses Windows Media, which has been my mainstay for hosting content for a long time. The community is pretty active and the interface is superb.

It’s really bandwidth efficient, you can “copy” the content locally to your own machine if you have the right tools (instead of using some proprietary wrapper around it like you do with Google), it’s optimized to your network speed, and doesn’t require any plug ins or anything. 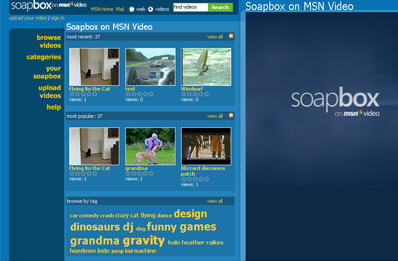 Why this is being released under the “MSN” brand is beyond us. Microsoft’s branding, between Live and MSN, is getting confusing.