YouTube, the two-year-old San Mateo start-up that raced ahead to become the leader of online video sharing, is facing the fight of its life.

Microsoft’s launch of its YouTube clone, called the Soapbox, made official today — see announcement with an offering of a way to sign up for a beta account, is only the latest challenge. (The dancing man with MSN colors strikes us as somewhat unhip, but then what can we expect a corporate giant to do? In fact, when looked at again, we see it is a cute metaphor for an old fogey getting with the program.)

Its fate may really lie in excruciating talks taking place with the Universal Music Group, which must decide whether to take YouTube to court or instead embrace and even invest in it.

The YouTube story is significant because there’s more confusion about YouTube’s prospects, its inherent uniqueness and its legality than ever before. Moreover, there’s more at stake in the world of online video than most of us realized just a few months ago. It is where movies, music and advertising meet — and billions are at stake, and anxious incumbent music giants are angry. The proliferation of broadband, new technologies making loading videos dead easy, and the high price of buying music compared to simply sharing it free on YouTube, is giving that upstart the edge. –> 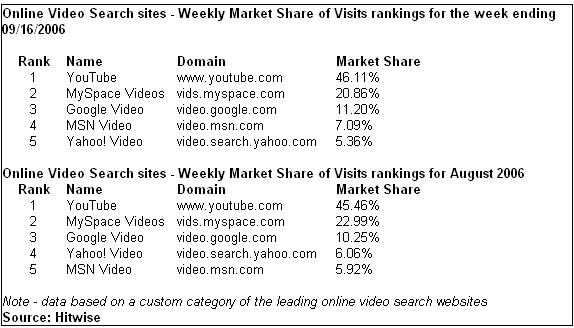 Here in Silicon Valley, the buzz is all about video, music and then more video — and throw in some talk about how to take it mobile. There’s a new announcement every day. (Just yesterday: Silicon Valley chip giant Intel announced a deal with AOL to place AOL Video onto Intel’s Viiv home computers. SanDisk, the Milpitas maker of music players competing with Apple’s iPod, signed a deal with Seattle’s RealNetworks, owner of music service Rhapsody, to imbed that service direclty into its Sansa e200 MP3 player. And Google is reporteldy talking with Apple about having Google vidoes downloadable to the iPod).

On the plus side for YouTube, the company announced a deal with Warner, whereby Warner will open its music library to YouTube users to integrate into their videos. But public details of the deal are few, and Warner still has the right for veto, and the royalty and revenue split agreement is unknown.

That deal came a few hours after entrepreneur Mark Cuban wrote an aggressive but notable piece titled “The coming dramatic decline of YouTube,” and outlined why YouTube is going to get sued and will implode just like Napster did in Web 1.0, even though Napster eventually cut deal with Bertelsman. In a bizarre coincidence, the Napster remnant company is losing money and just yesterday put itself on the block, as mentioned). The problem, Cuban said, is that you can search for songs on YouTube, and have them play, while minimizing the video screen — even those songs are copyrighted and no one is getting paid. If you read the comments on Cuban’s blog, you will see that outright confusion prevails about YouTube’s prospects.

YouTube’s fate may really lie in talks it’s having with Universal Music Group and Sony BMG. Fresh reports say these are talks about distribution deals. YouTube has long said it is engaged in talks, so it is difficult to say how real these reports are. Just last week Universal threatened to sue. Now apparently YouTube has offered to sell an equity stake to the labels, though that’s an easy offer to make when you are against the wall.

Finally, as Rafat at PaidContent points out, the filtering technology YouTube has to implement by the end of this year, to meet the accord with Warner Music, is significant. It is similar to technology already offered by both Audible Magic and Snocap, which works on audio — the main area of concern right now. If YouTube implements this rigorously and agrees to take down any infringing content that somehow slips past those filters, it has a pretty good defense, no?

This will be a drama to watch.