Venture capital investments into “Web 2.0” Internet companies this year are on track to double last year’s levels to about $500 million, according to a new report on the bubbling sector.

These latest stats are produced by a Dow Jones VentureOne report, which studiously avoids the methodology mistakes made by competitor PricewaterhouseCoopers (see our story) a couple of months ago. PricewaterhouseCoopers should be commended for its early experiment, but in this case VentureOne had the benefit of hindsight and its conclusions are more reliable. It went through and selected each company on a case-by-case basis. It also consulted experts, and ran its method by VentureBeat too, before publishing.

The report shows investors pumped $263 million into Web 2.0 companies during the first half of this year, which is more than $199.1 million invested for the entire year of 2005. 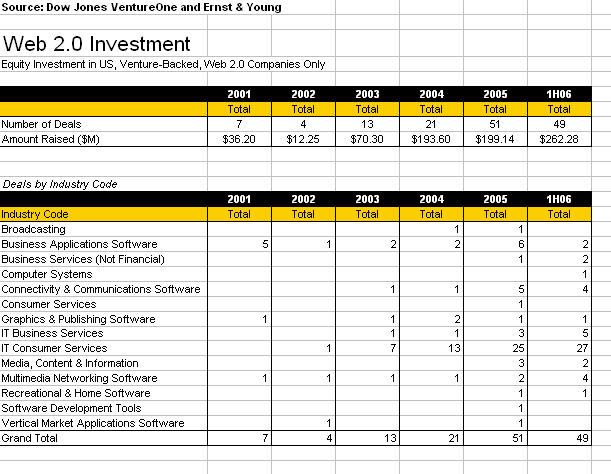 Some 49 deals were funded in the first half of this year, compared to 59 deals for all of 2005

Here’s a snippet from VentureOne’s report:

VentureOne’s research department adopted a strict methodology for categorizing potential companies, reviewing them on a case-by-case basis to determine if they met specific criteria. Companies included in this study have a business model that revolves around a dynamic interface facilitating participation through such methods as user-created content, networking, and collaboration. Applications used include podcasting, tagging, blogs, social networking, mashups, and wikis. Technologies used in these applications include: AJAX, RSS, SOA, CSS, XHTML, Atom, and rich Internet applications. Although VentureOne also tracks venture capital investment in Europe, China, and Israel, this study only included companies headquartered in the U.S.

The report did not provide a breakdown of all of the companies, so it is less transparent than the bold PricewaterhouseCoopers effort, which listed them all (although if you’re a paying customer of VentureOne, they’ll probably provide you the list). But the VentureOne report provides better perspective: Web 2.0 is a relatively small portion of the market. A total of $13 billion was invested in 1,213 U.S. venture-backed companies in the first half of this year. The deal size per company remains small too: The median size of a Web 2.0 financing round this year is $4.4 million, compared to $7.5 million for a venture financing overall.

Which partly explains why the field is so popular. It takes smaller amounts of money to experiment.

About 65 percent of the Web 2.0 deals so far this year have been “seed” or “first” round deals. Last year, there were even more: 75 percent of the deals were for these early-stage financings. 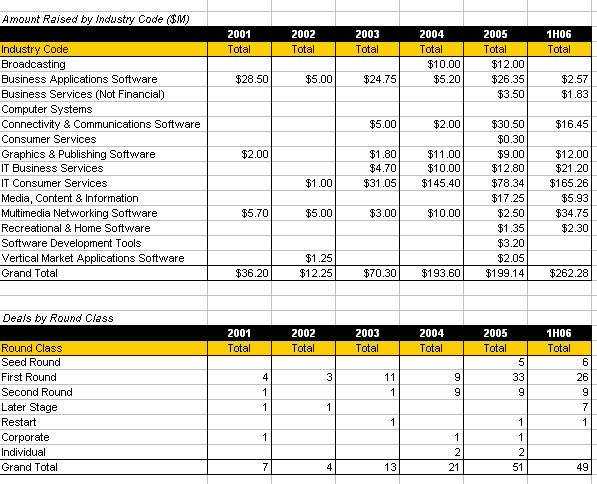 In a sign these companies are maturing, seven “late”-stage deals were completed in the first two quarters of 2006. That compares to zero late-stage deals in any of the last three years.

Also noteworthy for the Web 2.0 companies is their breakdown by stage of business. More than half the companies (25) receiving investments in 2006 were generating revenue, including three which were identified as profitable.

None of the financings in 2005 went to profitable companies. Those revenue generating companies also received 61 percent of the total investment.

However, the category appears too new for considerable liquidity activity. None of the venture-backed Web 2.0 companies have achieved an IPO to date, and fewer than 10 have been acquired, including such companies as del.icio.us and MySpace, the report said.

As a result, the majority of Web 2.0 companies aren’t getting the great valuations you’d assume they are, from all the hype you hear these days.

Among the largest Web 2.0 deals this year:

The most active investors in Web 2.0 this year include:

When compared over a longer period — since 2001–the most active investors include those three, along with:

(Finally, here’s another resource showing which VCs have linked with which companies, and worth taking a look.)