(Editor’s note: Christine Herron brings us the second installment of geek inventions at this year’s Burning Man — that festival of fun where a lot of Silicon Valley techies and others go to escape each year.)

A second, more risk-taking demographic at Burning Man took technology to the next level – fire. Hackers created brilliant shows in the desert night, combining elements such as Linux-based processors or infrared controllers with propane solenoids and flamethrowers. Here are my four favorite creations. 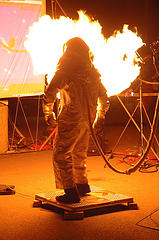 Dance Dance Immolation. A group called Interpretive Arson convinced insane participants to don fireproof, aluminized proximity suits with forced-air respirator headgear, then step up for a game of two-player Dance Dance Revolution. In this fire-hacked version of the arcade game, good play was rewarded with flaming propane blasts. Bad moves, however, earned the player a flamethrower blast in the face. (Yes, really shooting you in the face.) The more you screwed up, the more intense the flame would become. Naturally, a flamethrower in the face tends to throw you off-balance, so it was triply impressive if a player was able to get their groove back. Photo originally uploaded by nck wntrhltr. 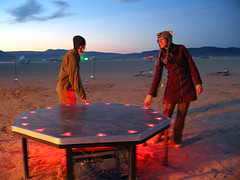 2piR was another interactive installation by Interpretive Arson. A person dances on a 6′-diameter platform, and 16 infrared proximity sensors on the platform’s rim interpret both light and motion. When light or motion is detected within 3′ of the sensors, a solenoid is triggered, and a corresponding flame erupts from the surrounding 50′-diameter ring of copper flame nozzles buried beneath the playa. Catch this video showing how the installation responded to a fire-spinner performing upon the platform. With the mechanics buried beneath the dust, controlling these flames almost felt like magic. Photo originally uploaded by Rubin 110. 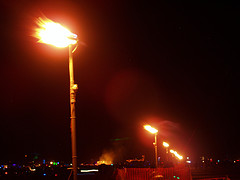 The Burninator II. Bill Codding constructed a 1000′ line of eleven towers that emitted flame rising 20 to 30 feet above the playa. This was both visible and audible across Black Rock City. Each flame tower could be individually fired at bursts as close as 0.1 seconds apart. Flame patterns could be kicked off according to Codding’s preset schedule, but interactivity was part of the design. Any Burner could visit the controller board to either choose a pre-programmed sequence, or to create their own design by manning the buttons. This 14-second video provides a good sample, but the mono sound doesn’t convey the large WHOMP! that accompanied each burst. It was adrenaline-pumping when they went off unexpectedly. (Note: I was able to play with an earlier version, called Burninator Jr., at the Crucible’s Fire Arts Festival in Oakland.) Photo originally uploaded by Organic Sculpture.

Serpent Mother. This gorgeous mobile art from the The Flaming Lotus Girls used midi-controlled hydraulics to bring this giant skeletal serpent to life. This queen of the playa had a total body length of 168 feet and included 64 vertebrae, 56 cartilage rings, 8 fused vertebrae, 46 discrete rib pairs, a cracking egg, 6 dynamic fire systems, an LED illumination network, and "50 Flaming Lotus Girls." The hydraulically animated head and neck used five cylinders to actuate the head and neck in all directions, and to open and close the jaws. The blazing fangs used a forced-air fire effect that hissed and popped as if they were dripping venom, to the delight of the people crowded below. Steel vertebrae serve both form and function, providing protection for electronically triggered, three-way solenoid valves; 23 kinetic rib pairs are supended on bearings so that they can be moved by both the wind and by participants. And, though I didn’t see this in action, I understand that the serpent’s egg opened to reveal a spinning circle of fire that was powered by midi-controlled pneumatic valves and a set of angled nozzles.

An RS-485-based network of microprocessors on Linux controls the serpent’s hydraulic solenoids, coordinate motion between cylinders, and manage the propane solenoids. This included the "safety third" (a common Burning Man phrase) design of turning off LED clusters whenever the poofer above it was about to fire. I was startled to hear that the FLGs used an embedded, open source programming language called Pure Data (PD), which was designed for interactive art applications. (Technology just for art? Be still, my beating heart.) The FLGs also thoughtfully provided control boxes along the spine and tail, allowing viewers to control the fire effects and create their own patterns, in addition to the crowd-pleasing shows that the creators originally designed.  Photo originally uploaded by loupiote.

It was notable that all of these creations incorporated popular behavioral trends around community interaction and user-generated work. Whether they are using an IR-controlled flamethower or an online news aggregator, audience members are drawn in by the invitation to take control.