My Maps kills start-ups? — There is plenty of commentary about how Google’s new feature My Maps is killing off start-ups doing the same thing. The new feature lets you build maps. Platial and Frappr are already doing this. This doesn’t make Google an ogre, as some suggest. An ugly company is one that does due diligence on your company, under guise of possibly partnering or acquiring you, only to pull out at the last minute and replicate what you do. My Maps makes a lot of sense for Google, and it should have been obvious for start-ups (see VentureBeat coverage) that it was coming. Plenty of sites have incorporated Google maps, and are not in danger, because they do something very different from what Google will do. In fact, you won’t see Platial complaining too much because its own backers, Kleiner Perkins and Ram Shriram are actually represented on Google’s board. Platial, of Portland, Oregon, you’re recall, raised $2.4 million in a first of funding just last month. And Kleiner partner Randy Komisar has been saying openly that Web 2.0 companies with no model other than supported by Google ads are pretty much goners (Platial relies on Google ads, no less).

Will your jacket power your iPod? — Researchers in New Zealand have developed synthetic dyes that can be used as solar cells to promise to generate electricity at one tenth of the cost of current silicon-based solar panels. The photosynthesis-like compounds work in low-light, and may even eventually be incorporated into clothing, so that your jacket may one day recharge your cellphone. The research is still in the earliest stage, so will be years before this gets to market. (More here).

Latest climate report from Brussels: 2Â°C rise from today’s temperatures will cause the extinction of 30 percent of species — Another scary report from the Intergovernmental Panel on Climate Change (IPCC), released in Brussels, Belgium today.

Delicious releases latest extension for Firefox browser — For those who love bookmarking, worth a look.

Mitt Romney, the presidential candidate for VCs? — The Republican presidential hopeful has already has $23 million in the first quarter, putting him well ahead of GOP rivals like McCain and Giuliani, and just behind Democratic frontrunners Clinton and Obama, reports PEHub. During his Mass. governor campaign in 2002, his support came from the who’s who of the East Coast private equity establishment. (See
Romney_Donors1.xls)

Ask undercuts itself with Google campaign — The anti-Google advertising campaign by competing search engine company Ask.com has only demonstrated how inferior the search site really is. Shortly after the ads appeared, people noticed that searching for the word “Google” on Ask.com returned this comment: “Don’t be a droid — use different sources of information” next to a drawing of a man on puppet strings and a link to Ask.com’s anti-Google Web site. Ask’s Jim Lanzone says the link was put up by overzealous staff, and was quickly removed to avoid any doubt about the impartiality of the site’s searches. Too late. That sort of internal gaming has never happened at Google, to our knowledge — and it raises questions about what else Ask is tinkering with behind the scenes we’re not aware of. We’re the first to support the underdog. But Google’s discipline — fanatical, some would say — is one reason you can trust its results.

How basic is Twitter? — We don’t want to add to the hype, but Dave Winer, always a big thinker, and creator of break-through protocols like RSS, is taking a serious look at Twitter, the new company getting buzz for letting you message to the world what you are doing at any given time. Winer suggests it could be the basis for a new open communications protocol. Meanwhile, take a look at this 3D Twitter viewer (screenshot below), which takes Twitter’s messages and places them on a global background to give you a smattering of what people are saying around the world. It uses Microsoft’s Virtual Earth. It is just one of several viewers created since Twitter became all the rage at the SXSW conference in Austin, Tex. a couple of weeks ago. 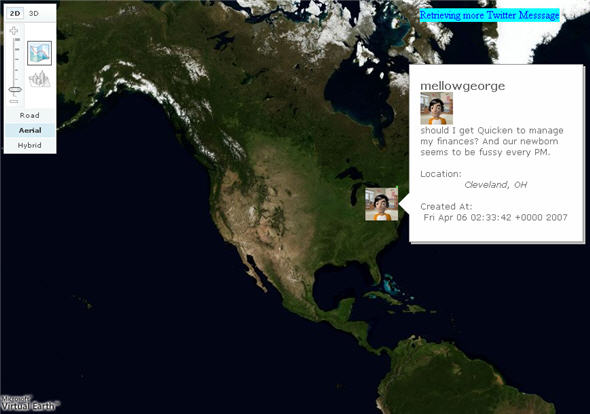