Who is Sick? is a new site that lets you know what sort of sicknesses are breaking out in your area.

If you’re suffering a headache or feeling nauseous, it could be related to your environment, and those around you — and it’s helpful to know that. By typing in your zip code, you can see whether anyone else near you has reported similar symptoms. It lets anyone access the site and update sickness information immediately. The company’s founder PT Lee seeded the site with data from the Centers for Disease Control and Prevention (CDC), but has since relied on user submissions.

CDC’s BioSense, which hospitals and public health departments use to detect disease outbreaks, is restricted to use only by officials of those organizations. CDC also has weekly updated flu site. However, there are no other ways to get real-time information about these and other symptoms. So far, as you’ll see in screenshot below, the site tracks the following: fever, headache, muscle ache, runny nose and stomach ache. There’s also a “more symptoms” option and a box where you can describe your symptoms in detail.

This is a great way to help in the defense against possible pandemics like a bird-flu pandemic, however Lee said he is not tracking such symptoms for now, and doesn’t want to. That, ebola, e-coli, AIDS are all being tracked by other sites, and he wanted to track more common sicknesses. Also, the site is vulnerable to scare-mongers, who may spam the site with false reports. Lee told VentureBeat he is limiting each visitor session to five submissions, and is working on a way to track IP addresses, and to produce a community red-flag system, which would let users alert Lee’s team to possible spam. He’s also doing database analysis, looking for suspicious patterns, though admits he’s cleaning up about six hours behind submission times — and has deleted about 30 posts.

Still, we’d encourage Who is Sick to obtain sophisticated tracking and moderation techniques, so that it can be more comprehensive — and track the more serious diseases. That would boost its traffic and make it even more useful.

The self-funded company is based out of Los Angeles, CA.

(This post was written with assistance from Rex Dixon) 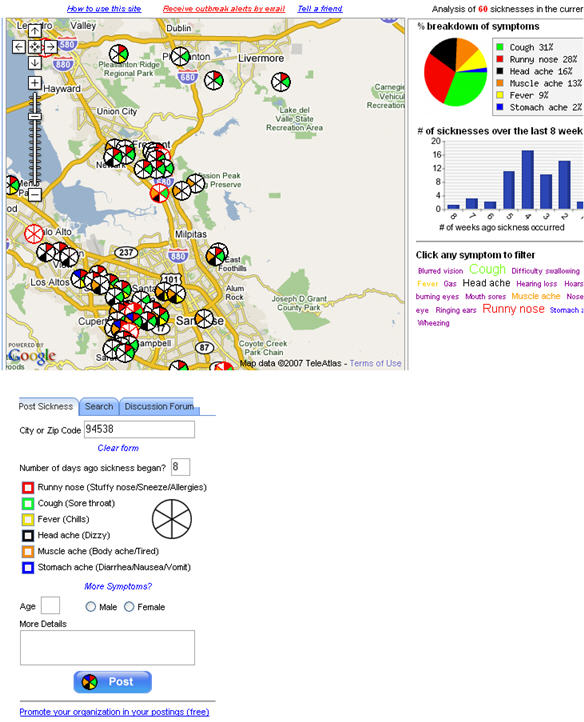