Look in the mirror. Do you really know yourself? Could you be happier? Thanks to a new web site called Inpowr, which launched yesterday at the Web 2.0 Expo in San Francisco, you can finally learn how to build a better YOU 2.0.

Inpowr bills itself as the web’s first platform for self-exploration. 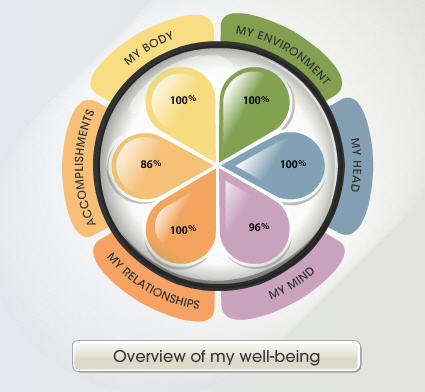 I scored well in most categories, though I only got an 86 percent score for accomplishments, probably because I’ve been kicking myself lately for failing to coin the Web 2.0 label before everyone else. It was so obvious! But I digress.

Once inpowr politely informs you of your deficiencies, it guides you to create an action plan for improvement. It suggested I improve my altruism to boost my accomplishments score. Was it bad karma for me to pick up that quarter I found on the floor after yesterday’s VC session? Maybe I should have Twittered a lost and found.

The service emails you after 21 days and prompts you to re-evaluate yourself so you can measure progress toward your goals, and identify the specific actions that led to the progress.

The site will soon implement social networking features so that users can harness the collective experiences of other users. Kind of like a 12-step program where God is replaced by your social network and a friendly lotus flower.

The technology behind the site is based on developmental psychology theories about how human beings relate to the perceived environmental realities of their physical, mental and social environments. The general idea is that with a little hand-holding from the site and encouragement from our friends, we can all be guided toward healthier lifestyles and attitudes which in turn lead to a virtuous circle of ever-greater health and happiness.

Looked at another way, for example, if you lack physical energy due to poor nutrition, your work life may suffer, which could cause you to lose your job which would impact your financial ability to support yourself, which would make you sad. Obviously, this is an oversimplification, though any geek worth his salt will tell you Web 2.0 is also about the interconnectedness of everything.

Psychobabble aside, there’s probably a sizeable market for inpowr’s services if it can reach a critical mass of community participation.

As a society obsessed by self-improvement with the assistance of quick fixes, we already spend hundreds of billions of dollars a year in the pursuit of greater happiness, whether it’s via anti-depressants, stimulants, diets, plastic surgery, mental therapy or self-help books.

A free web site that gently guides us toward healthier actions, lifestyles and attitudes may be just what the doctor ordered.

Although the company hasn’t yet revealed its model for generating revenues, many other health and well-being sites such as WebMD have already proven the desirability of this audience to advertisers.

The site is owned and operated by Quebec-based Humanix. The company closed its first $150,000 angel funding round in September, 2006 and a second $350,000 angel round in March 2007. Michel Chioni, Humanix’s president, tells VentureBeat the company is in talks with Canadian VCs for a possible $1-$2 million round.