Silicon Valley venture capital firms want to invest in the world’s most innovative technology companies, but you wouldn’t know it from looking at their stultifying Web sites.

Why are these VC firms such fossils? Flash technology, the stuff that lets you run a video with animation, is dead cheap to use, and paying someone to create a decent site doesn’t take much. Yet, look at the sites of the valley’s leading Sand Hill Road firms. You’ll find sites coded in simple HTML, many with team pictures of the VC partners hamming it up. You’ll find none of the cool, yet inexpensive Web 2.0 tools that the VC firms talk so much about — for example RSS, or podcasting or other interactive technologies that let users engage more intimately with a site.

It is thus with two eyebrows raised that we greet the debut of a more dynamic kind of site at Mohr Davidow Ventures, one of the big Silicon Valley firms. There’s an image below, but if you go to the site you’ll see how images bounce up and down on the screen. If that were all, it would be silly, but if you click on one of the boxes in the middle, say the one that says “Driving the Digital World,” you’re taken to the digital Internet companies that the firm has invested in. And then, on the right, a slide show invites you to try each one of the companies. Or, click on “Initiating Innovations” and you’re taken to a page that has podcasts. You can subscribe to some of this with RSS. Nothing earth-shattering but a heck of a lot more than we’ve seen elsewhere from the stodgy VC world.

In fact, MDV’s site makes the legal fight between Sequoia Capital and ComVentures all the more ridiculous. Sequoia had an awfully clunky site, organized like most firms around sectors invested in (rather than investment themes, like MDV’s site) and bland green dots in a table which sector each partner invested in. It recently revamped its site (thumbnail at left), with a pleasing neon green, keeping the nice play on the color of money, and sporting an impressive grid of photos of its high-profile entrepreneurs. So, sure ComVentures may have wanted to do something similar, but why copy Sequoia’s site when they could have done something more original? Sequoia itself could have done so much more by using Flash. (Update: Some people are strongly disagreeing with me on this; see comments below).

What’s surprising is how lemming like the VC firm sites are. Take a look at Accel, which has an element of experimentation, but then look at NEA, CRV, Mayfield and Clearstone, each having a polite portion of their site dedicated to Flash — though nothing grabbing. And those are just the better ones. Goes downhill from there. Union Square Ventures, though, is somewhat original: Its site is a blog.

Did we miss any worth noting? We checked about two dozen sites, but didn’t do a definitive search. Feel free to comment below if you see any others that push the envelope. Or, for fun, any howlers? 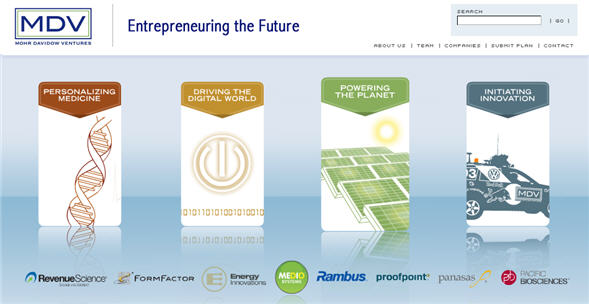