Buzzlogic, a San Francisco company that tell marketers which blogs are the most influential, is now distributing its online product.

It’s looking pretty good. This is unfortunately not a free software. You’ll have to pay about $12,000 a year.

It tracks conversations around certain topics. And more than just tracking the influence of blogs, it also ranks which topics are getting attention from those influential blogs. Its strength is in the visual portrayal of these conversations and blogs. VentureBeat first covered Buzzlogic here.

(Clarification: The following description is based on a demo of the product centered around bloggers and the American Idol Contest. Buzzlogic did not give me free access to try my own searches, so it isn’t clear to me how well this technology applies beyond this example).

Take, for example, the American Idol contest. Buzzlogic lets you search the names of each of the contestants, and it tells you many blogs are linking to them. It shows how controversial and polarizing contestant Sanjaya Malakar was drawing the most attention (when we first looked at Buzzlogic a couple of weeks ago), while Melinda Doolittle was showing a strong second — even while Chris Sligh was picking up more “recent” posts than Doolittle, showing some sort of momentum. See first graphic below.

You can then find detailed information about each contestant, for example, drilling down into the posts about Melinda Doolittle. There you’ll see what words the most influential bloggers are using in posts about her. Buzzlogic also analyzes text to see whether posts are positive or negative. The posts about Sanjaya Malakar are negative, as you’ll see in the third image below.

Buzzlogic shows who is linking to each blogger, and the quality of links. See image at far bottom. If a popular blogger is getting lots of links from other bloggers, marketers can look at the quality of those incoming links to get an idea about whether that popular blogger is really as influential as they seem. It tries to distinguish between bloggers who are “on topic,” those who are “popular,” and those who are “influential.” Buzzlogic also shows the most influential blog posts on a particular topic (on the topic of Sanjaya, for example, they’re listed on left hand side of bottom image). Still, Buzzlogic has some ways to go. It still measures pure numbers, and not the type of individual readers each blogger is getting. The assumption is that numbers alone measure influence, which is true if you’re Pepsi, and want to sell the most cans of Pepsi as possible. But sometimes, the quality of audience matters. Buzzlogic has done a good job so far, and has lots of fertile ground to till.

Buzzlogic launched last spring, with 25 customers testing the original “alpha” test product. Some 80 customers then began using its “beta” test product, half of those paying. It has since increased the number of beta users to 164. It has 20 employees. It charges $100 a month per conversation tracked. An entry level package of $12,000 a year, therefore, gives you 10 conversations (in the case of this American Idol Contest analysis example, it would all be part of one conversation, and that includes edits to terms, for example, if you wanted to add a date, and analyze the terms “American Idol 2007”.) The annual subscription gives marketers the ability to constantly monitor the influential bloggers in subject areas they care about. 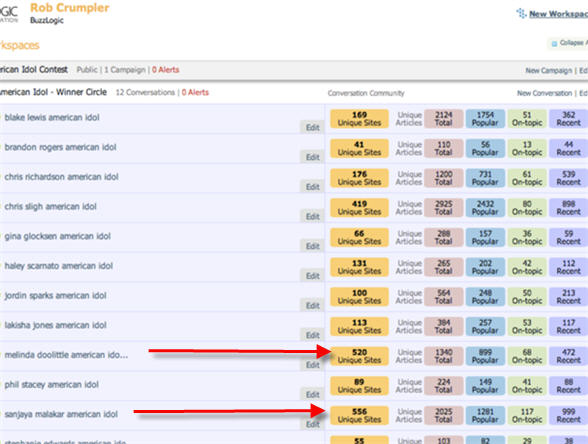 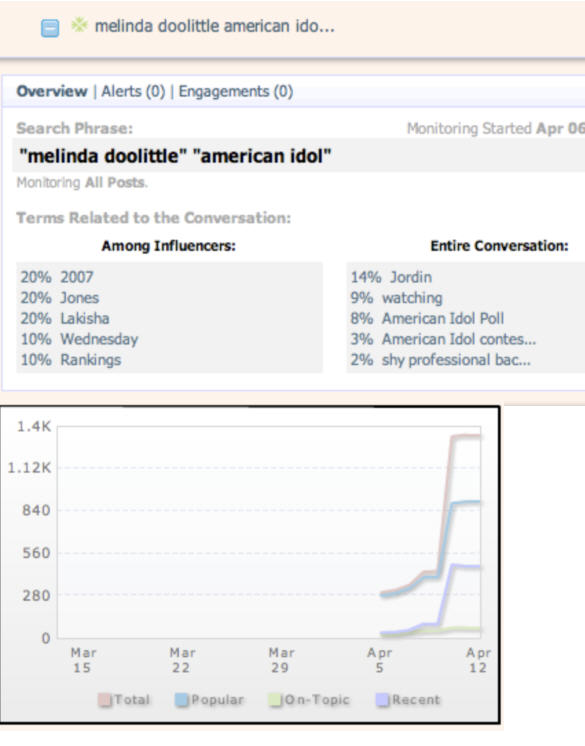 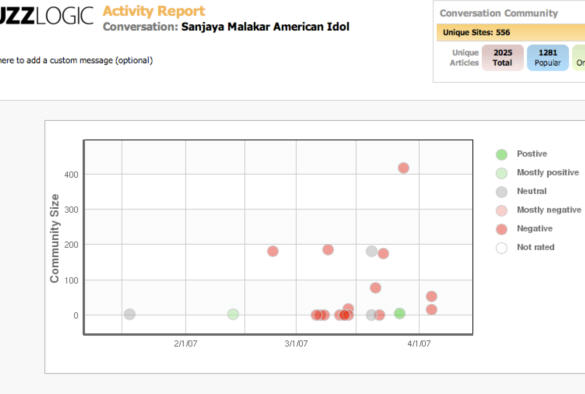 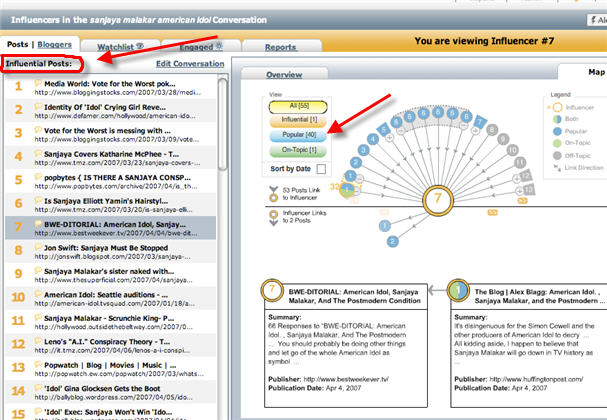