Michael Moritz, most influential venture capitalist — Moritz, a partner at Sequoia Capital and early backer of Yahoo, Google among others, is the only VC to make Time’s list of 100 most influential. “Many people see Mike as a loner. I think it’s because he’s ahead of everyone else…,” writes Google’s chief executive Eric Schmidt for the profile.

Sun’s mobile initiative — It is doing its best to keep Java the language for Web-connected mobile devices. See NYT story on its latest Java update.

Akimbo, early Internet video-for-TV company, throws in towel — The San Mateo company that built a set-top box to allow you to bring Internet video to your TV, appears adrift. It is ditching the set-top box, which no one was buying, and wants to sell its software. This comes after it tried to produce a service letting you get video to your PC. It apparently held too long to the box strategy. Now it finds itself competing with a host of competitors, and it’s not clear what it will do the rest of the $27 million it raised from Cisco, Kleiner Perkins and Draper Fisher Jurvetson, much of it raised less than a year ago. It’s just released a video destination Web site, making it one of multitudes.

Google losing its creative edge? — Aaron Swartz, the whiz kid who built his first Web site at 13, was behind news-ranking site Reddit and who has worked on Creative Commons and recently chose to return to academics (see our previous coverage; scroll down), decides that working at Google doesn’t interest him: “None of the people I’ve spoken to at Google seem to have jobs that strike me as particularly appealing.” (See interview with Philipp Lenssen, of Google Blogoscoped.)

LinkedIn vs. Facebook — Facebook has become the dark horse in the contacts race, and is giving LinkedIn a run. Over the past two months, we’ve been getting many more contact requests from Facebook users we actually care about. The profiles are more colorful too (with pictures), and are part of a community feel — last week, we engaged in an extended conversation with a contact using Facebook’s messaging platform. Now what? LinkedIn was first to wrap up the professional crowd, and is at the tipping point of becoming a must-need tool — for finding jobs, or employees, and other leads. Will Facebook swoop in and steal this function? Anyway, hat-tip to Valleywag, which took the words out of our mouth before we could speak them.

No VC tax — yet, at least — Sen. Max Baucus (D-MO) tells the National Press Club that his committee is “nowhere close” to drafting legislation for the VC tax, which would have raised the rate they pay on their “carried” income from profits on investments. But it’s early days. The wave of private equity buyouts lately are causing some backlash among workers in Europe, and it has spilled over to the U.S., and its hard to tell how much pressure Congress will get to take action against the private equity folks. The VC lobby’s Mark Heesen last week made it clear VC firms — represented by his National Venture Capital Association distance, will distance themselves from the buyout/private firms, if push comes to shove. Private equity firms typically spend more money and invest in much more mature companies, and are the ones who will draw criticism when layoffs begin. Indeed, earlier this year, the PE crowd was forced to form its own lobby on Capitol Hill, led by Carlyle, KKR, Blackstone and others. Called the Private Equity Council, it is led by president is Doug Lowenstein. (Couldn’t find a Web site.) To top it off, the NVCA has contributed $10,500 to Baucus since 2001, according to PeHub.

Google is part of the 4G Coalition trying to influence the auction of some valuable wireless spectrum — Details here. We’ve written about this spectrum story here.

Rupert Murdoch’s DNA — …and how it clashes with the sensibilities of America’s great journalism families (see the New York Times story, written in the wake of news that Murdoch is bidding to buy the family owned Dow Jones/Wall Street Journal)

Defense Venture Catalyst Initiative — What makes the so-called DeVenCI unusual, its participants say, is that by bringing together military procurement agents and technology investors, it is creating “a kind of brokerage for ideas,” reports the New York Times. This sounds vague. Quite unlike In-Q-Tel, the CIA’s venture arm, which has been very focused, and so has avoided criticism. One of the early participants was Ted Schlein, a partner at the venture capital firm Kleiner Perkins, the NYT reports. One of his firm’s portfolio companies was helped by the program: ArcSight, a Cupertino, Calif. security company, won $3.6 million in related contracts over the next few years. 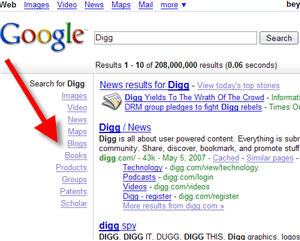 Google has new left-hand rail for search — Check out the various links provided when you search for “Digg,” for example (see BeyondTech blog). This is a feature that comes with Google’s new Web history feature

WordPress offers a statistics plugin — For the millions of WordPress users, such as ourselves, this will be a very useful tool. WordPress’ lead developer, Matt Mullenweg, has more here. Plugin details here. It is useful because, because as Jeff Nolan explains, its open nature lets you bring in data from other services too: MyBlogLog could drop in some script and include embedded MyBlogLog stats on the same page in the dashboard, or Technorati could drop in their own widgets. See below.