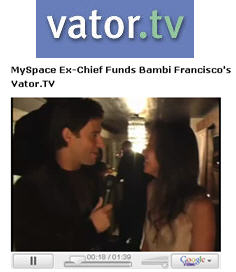 Bambi Francisco, the former MarketWatch columnist who left last month amid a stir to form her own video company, has finished raising a round of capital.

The round includes Richard Rosenblatt, the former chief executive of Intermix, owner of MySpace, Georges Harick, a former Google engineer who helped develop Adsense, and Matthew Hill, early investor of Shopping.com and, as expected Peter Thiel, former chief executive of PayPal. She is keeping the amount confidential, but we expect it is at least several hundred thousand dollars.

Click on the image above for a link to a video showing Bambi talking about her company Vator.TV with Rosenblatt, after he steals the mic from someone else (Andy Plesser, of Beet.TV).

Entrepreneurs will be able to pitch their ideas in video, Powerpoint or other document. They can then upload it to Vator.TV, either password protected (where chosen investors can view the pitch) or publicly. In other words, a video form of RaiseCapital.com (see VB coverage). The site will soft launch next week, with a more formal launch later on. Early videos will feature Francisco and Thiel.

Rosenblatt is chief executive of Demand Media (see our coverage), which is buying up generic Web sites and searching for content to fill them up with. He’s also been marketing the .TV domain category, and Francisco said Vator.TV will likely be participating in that, though specifics haven’t been agreed. She said Rosenblatt is a significant investor.

Francisco said she was able to access Amazon’s EC2 offering, which will lower the costs of streaming the video.