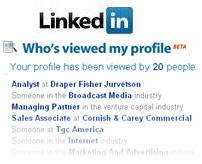 LinkedIn, the Mountain View Calif. business social networking site, has created a new feature that lets you see who is viewing your profile.

The feature was frequently requested by LinkedIn’s users. The company has tried to balance transparency with privacy concerns, with the result that the feature is limited in its usefulness.

For instance, I’ve had twenty people view my profile over the last month (see screen-shot below), and the list includes people from the “Porter Novelli” public relations firm and “Draper Fisher Jurvetson,” a VC firm. It shows that the person from Porter Novelli is an “account supervisor,” narrow enough to provide a smidgeon of relevance for me, but at the same time not enough to identify the individual. If there aren’t at least five people with that title at the company, LinkedIn shows me just the name of the company they’re from. And if there aren’t at least five people at the company, Linked In will just tell me that someone from the “public relations industry” has viewed my profile. 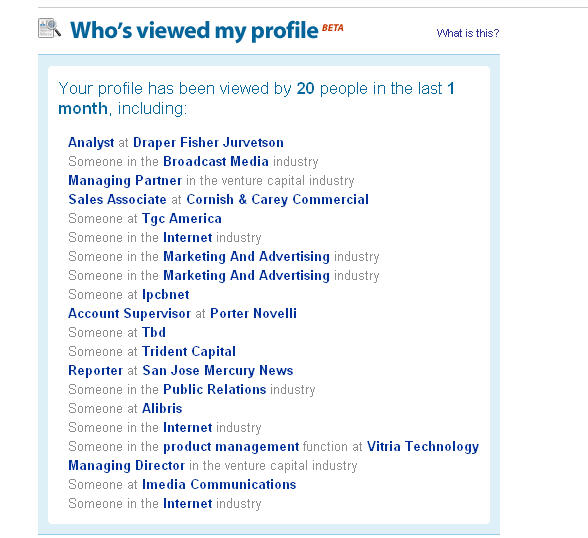 Ultimately, the “view my profile” feature is best left to dating sites. Dating site HOTorNOT now has a feature where a woman being viewed can see the profile of the guy doing the peeping, and get in touch for a date. See image below left for example, for how HOTorNOt is pushing this feature. 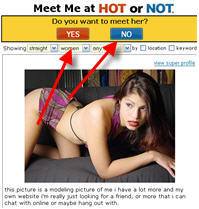 The LinkedIn feature can be found on the right hand side of your home profile page. The feature is not offered, however, if no one has viewed your profile over the last month. If you don’t want anyone to be able to see that you’ve viewed their page, you can change privacy settings here.

Update: Some are asking how to find the LinkedIn feature. See screenshot below of my homepage (with names of my contacts whited out to protect privacy):
. 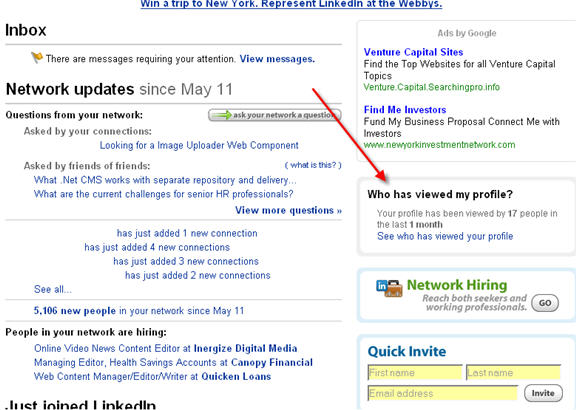