Evite vs. Socializr continued — The bad blood between Jonathan Abrams, founder of Friendster and now founder of online event service Socializr, and the lawyers at Evite, is worse than we realized. The bitterness started during the Friendster days, and worsened when Evite threatened to sue Socializr, saying the start-up had copied Evite’s templates and styles. Abrams now responds with a diatribe, saying Evite is a hypocrite and a bully. We’ve requested comment from Evite.

Voki makes a better avatar — Voki is the latest animated avatar service offered by Oddcast, and is designed for bloggers. It is free, and has made improvements over its former avatar product, called Sitepal, which was for businesses. You can leave audio clips by talking right into your laptop, and your avatar will speak your words from your blog. Fred Wilson, an investor the company, is pushing the company to let avatars speak the words you might leave it with a Twitter message. If you haven’t seen the President Bush avatar, check it out (you’ll have to wait a few seconds for the intro to stop, but then you can change his nose, skin, mouth, shoulders, color of eyes, skin, etc). Similarly, Voki gives you a dashboard that makes it easy to edit your own avatar. It is similar to Meez (our coverage). 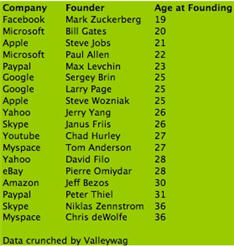 Founders of best companies are in the mid-20s or earlier — That’s the observation made by Valleywag. This topic has been controversial for some time. Sequoia’s Michael Moritz has made a big deal about backing young founders. Can you argue with him? He made big money from YouTube, Google and Yahoo — all started by young founders.

Yahoo has a new CFO — Some say the banker-as-CFO heralds more deal-making, more acquisitions for Yahoo. Yahoo did look at Facebook last year, but it’s probably too late now to try again. There’s an independence and pride over at Facebook these days that suggests it may decide to go for an IPO or nothing.

More details on the backing of Jason Calacanis’ company — Calacanis, who is starting a new company called Kokua (scroll down), has gotten funding from Sequoia, as earlier reported, and also apparently from News Corp’s Jeremy Phillips and CBS, if you believe this report. We’re trying to confirm.

Google’s wants to watch you — At least, that’s what this patent filing suggests (see details). The patent would monitor your behavior in PC video games, and seek to serve you targeted advertising based on that behavior.

Amazon.com plans to launch DRM-free digital music store — The iTunes-like service is scheduled for later this year, and will sell songs from EMI without the anti-piracy technology currently demanded by most music labels. However, it doesn’t appear any different from iTunes, which has already announced it is doing the same. Amazon says it will have “millions of songs” without protection.

Warner Music Group sues Imeem — Imeem, a Palo Alto, Calif. music start-up, came out of nowhere earlier this year, boasting in March it was the fastest-growing company on the Web, with 16 million unique users a month. (Hitwise ranks Imeem fourth among multi-media entertainment sites, behind Google Videos, YouTube and MySpace Videos). Users create and share music playlists. The copyright-infringement suit from Warner Music could be bad news for the young start-up, which had labored for two years in relative obscurity until changing its model last year. The company did not respond to a request for comment. Morgenthaler Ventures, a backer, declined comment, as did another backer, Sequoia Capital (Sequoia, of course, backed YouTube, which is a target of a major suit from Viacom.) During the upload process, Imeem does issue a warning to users not to upload media they don’t own, but that wasn’t good enough for Warner.

Sony is in talks to buy online childrens’ game, Club Penguin for $450 million — Club Penguin is a company we’ve covered before — noting its excellent execution of an enjoyable game for kids centered around happily chatting penguins. PaidContent is reporting it has annual revenues of $60 million, and margins of 50 percent. The impressive part is, the company didn’t take any venture backing to do this.

VCs still trying to distance themselves from those job-cutting private equity guys — “We’re in two different industries,” says Ted Schlein, venture capitalist at the Silicon Valley firm Kleiner Perkins to Fortune. “We recruit. We help companies sell product. We do business development. [Private equity] is not an industry that can talk about creating ten million jobs.” The point, of course, is that any new tax, if there is one, as Washington is discussing, should be levied on the private equity guys.

In other news….
–MySpace announces more video channels featuring content from an array of big-name publishers, in an apparent move to go after YouTube.
–Google, without advertising — Really.
—Coupons, a Mountain View, Calif. provider of printable coupon marketing products, said it has acquired Consumer Networks LLC and its Boodle.com coupon service, from Gannett Co.
–Mozilla is experimenting with “Joey,” a service that lets you select portions of Web sites, including images, text, and videos, and later access them from a cell phone.