Tesla Motors, the electric sports car start-up, has created a new division to sell its high-tech batteries, and that it has taken a $43 million order from a Norwegian car maker.

Chief executive Martin Eberhard has just blogged about the move.

The Norwegian electric car maker, Think (see image of the Think car, below), will buy the lithium-ion battery packs and will bring Tesla $3 million this year and $40 million in 2008, according to additional details in a Mercury News story to run tomorrow.

Tesla has developed a new division, the Tesla Energy Group, to develop and make battery packs for Tesla’s vehicles and the growing market for such high-end batteries elsewhere.

(Update: Turns out, Michael Kanellos first mentioned the strategy move back in January. The actual order amount is what is new.) 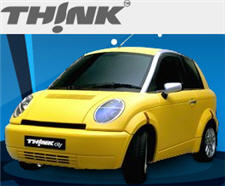 Tesla said Bernard Tse, a private investor, will head its Energy Group. Tse founded Wyse Technology, and is a former Tesla board member.