Ever wanted to get to know your neighbors before interacting with them in real life? If so, fatdoor, which launches its public beta tomorrow, might be for you.

Fatdoor takes phone book data from companies like infoUSA and mashes it up with Microsoft Virtual Earth, mapping people to their own homes and creating pre-populated visualizations of entire neighborhoods. (see screenshot below).

It combines standard social networking functionality and a wiki thats lets you (or your neighbors and friends!) fill out your profile. It registers your immediate geography, and so makes it easy to find like-minded people a street or two away.

Fatdoor will start out covering Silicon Valley and spread outward, so if you live in the Valley, chances are you’re already on the site. In its current form, fatdoor is an opt-out system: If you are in the phone directory, it creates a basic profile for you, and by default, this profile is a wiki that can be edited by your neighbors whether you are aware of fatdoor or not. (You can change this once you’ve signed up) Fatdoor lists the names of anyone who edits a profile, which it hopes will deter users from writing terrible things. But if someone pretends to be you and takes your profile before you, you have to submit proof of your identity — like a driver’s license and utility bill — to get it back.

Individuals on the maps are represented by “pushpins” that look like toy figures from back in the day. Hover over one, and a window with a photograph (if one’s been uploaded) and a link to that person’s profile pops up.

Before you’ve gone to the site and registered, your pushpin stands at your address, which, like the rest of your neighborhood, is crisply rendered in a photographic bird’s eye view. Afterwards, you can move the pushpin onto your house.

Your Fatdoor profile is standard for social networks: personal details, interests, jobs, and so on. You can create neighborhood groups and put them on the map, post shout-outs on a community page and check out listings for local events. Fatdoor also aggregates real-estate information, so you can see whose houses are for sale and for how much. For now, at least, fatdoor does not host videos or photographs. We’re not certain how this site will make money, but perhaps targeted local advertising and real estate information will work.

The interface is clean and simple. The alpha version that we saw in a demo covered only a small part of Cupertino, CA. It had a neighborhood feel, with a page that highlights groups like the “Parent’s Babysitting Exchange,” and the “Kiwanis Club of Cupertino.” That being said, while it looks great for suburban neighborhoods, fatdoor will have serious challenges when tackling cities like San Francisco and New York. I, for example, live in Manhattan and have around 240 neighbors in my building and thousands right next door. It’s hard to imagine how the current interface will deal with this kind of density, but fatdoor’s CTO, Chandu Thota, formerly the Lead Developer of Microsoft’s Virtual Earth, knows lots about visualization, so we’ll have to wait and see.

Because of its different approach, fatdoor doesn’t have the same me-too feel that many other networks have. Despite the privacy question, for people inhabiting suburban sprawl it could become a great way to create neighborhood communities where none existed before. 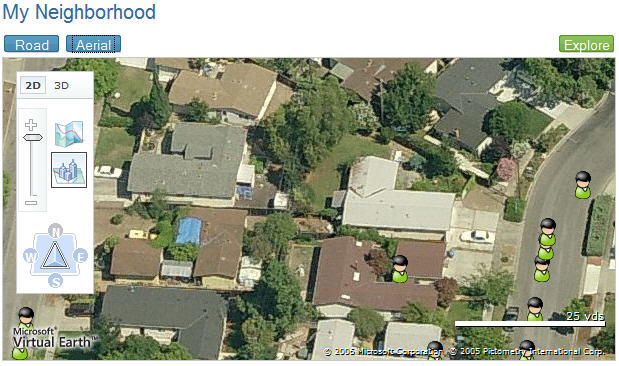 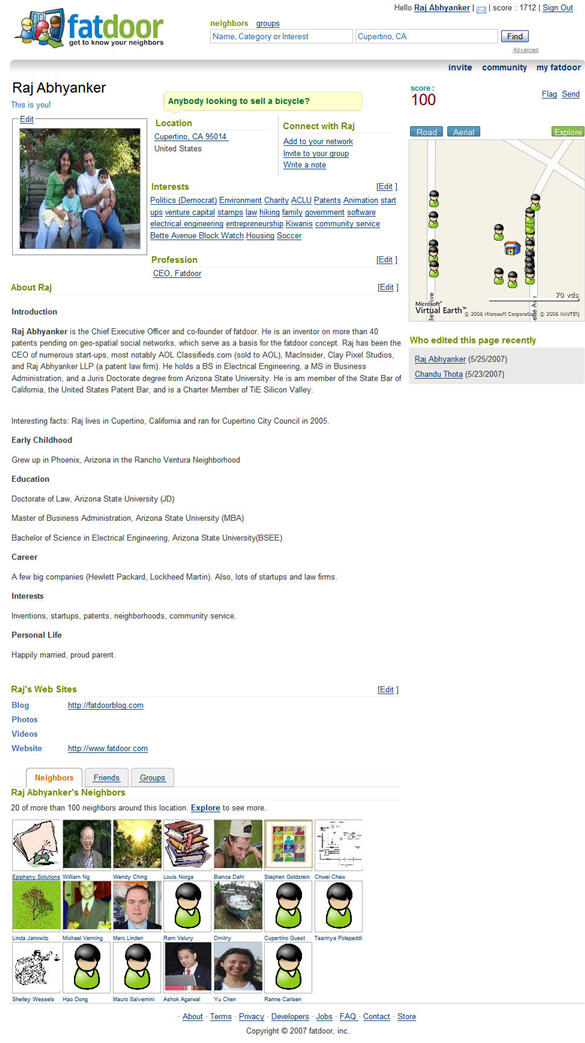