Sedo, the world’s largest domain name auctioneer, sold a popular URL, Boobtube.com, for $41,688 last week, but then turned around and canceled the sale because the seller didn’t really own it.

This auction had lasted more than two weeks, and was frenetic.

The cancellation raises prickly questions about the nascent domain name exchanges, which are handling several hundred million dollars of trades. Are they trustworthy? Are they open to market manipulation?

This might be pardonable if it were an isolated, very rare case. However, it doesn’t appear to be so — from what we’re hearing. I know about Boobtube.com, because I was one of the bidders, and Sedo’s customer service department notified me of the nullified auction. I was the first bidder at $5,000 (my wife and I are authors of BOOB TUBE, a novel about the daytime television soap opera industry, to be published later this year). Click on thumbnail images to see the start and ending bid prices.

Clearly, the exchanges must take more decisive measures to protect the interests of buyers and sellers. While I appreciate that I and my fellow bidders weren’t defrauded of our money, it was still a big time sink. Sedo apparently noticed the problem only at the last minute. Without the essential service of trusted and transparent exchanges, domain buyers and sellers are forced to negotiate blindfolded in the virtual equivalent of a dark alley.

If Sedo serves as any example, the domain exchanges have a long way to go. At Sedo, for example, domain buyers and sellers are presented with incomplete information about how the auction process works. In my case, my quest at Sedo for Boobtube.com actually began about one week earlier than the public auction. Sedo lets you negotiate one-on-one with seller, who was initially asking $7,500. My bid started at $500, I raised, he lowered, and when I raised it to $5,000 I was surprised to learn my private one-on-one negotiation was moving to a public auction. Nowhere in their online documentation does Sedo warn buyers of this possibility. (Sedo’s customer service department tells me sellers like this option). Imagine you’re at an art dealer, negotiating a price for a painting and at the last minute, the dealer ends the negotiation by saying, “sorry, I think I’ll auction this at Sotheby’s instead.”

Will Sedo press criminal charges against the naughty seller for trying to sell a domain he didn’t own? We doubt it. Despite my personal requests for additional details, Sedo has been mum.

If these shenanigans were taking place on the Nasdaq or NYSE, you can bet the exchanges and the Securities Exchange Commission would want to hang the perpetrator from the nearest lamp post.

Up until last year, Boobtube.com was owned by Rogers Cadenhead, an author, blogger and industry gadfly who himself came to notoriety when he registered benedictXVI.com in anticipation of the new pope.

What does Cadenhead have to say about last week’s Boobtube.com fiasco? I contacted him last week to inform him of the scam, and to learn if he still owned the domain and was willing to sell it. His reply:

“I just heard about this auction today from the winner, who had the high bid at $45,000. [Editor’s note: not the correct price]

I sold the domain last year. The current owner put his WHOIS information private and hasn’t done anything with it yet.

It’s very weird that Sedo allowed an auction for a domain that the seller didn’t own. I would’ve thought they had safeguards to prevent that.”

Why did it take Sedo so many weeks to determine that the seller of Boobtube.com didn’t own the domain?

It’s difficult to say, although for the rest of us amateur domainers it’s becoming more difficult than ever to identify the true owners of a domain. To liken the domain trading business to wild west horse trading would be an understatement.

Up until a few years ago, it was simple to identify the owner of a domain. You just searched the WHOIS database at Network Solutions or Internic. Search for “pepsi.com”, for example, and you see it’s owned by Pepsico. But search for BoobTube.com on WHOIS and you learn only that the domain is parked at Godaddy.com, but the identity of the owner is cloaked. 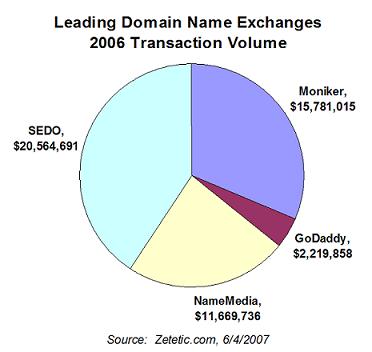 Big money is at stake for the domain name exchanges, all of whom are still small compared to the potential for this business.

Several domain exchanges have emerged as early leaders. Sedo is ranked number one by domain name appraisal consultancy, Zetetic of Davis, Calif, who recently released revenue data they compiled on the top five exchanges. Zetetic says approximately $111 million in after market domain name trades took place in 2006, with just over 50 percent of those taking place in private deals outside the exchanges.

Zetetic’s numbers, however, most likely underestimate the overall dollar volume of domain name buying and selling. In 2004 alone, for example, publicly traded domain aggregator Marchex of Seattle paid $155.2 million in cash and $9 million in stock for a single portfolio of 100,000 domains, many of which were misspellings of common brand names.

According to David Kesmodel, a Wall Street Journal reporter writing a book about the domain business, Marchex currently owns about 220,000 domain names.

Driving the rich price of domain names are the following: The combination of direct navigation (users type keywords or search phrases rather than URLs directly into their browser’s navigation bar), domain parking and keyword-triggered sponsor advertising such as Google Adsense, which is how web site publishers monetize the typically wayward traffic.

Click on any one of the millions of parked domains – we’ve all stumbled upon these nearly useless pages – and you’re presented with a bunch of sponsored ads. No original content. It’s big business for the domain parking players like Sedo and GoDaddy, as well as for Google and Yahoo who supply the ads. And for thousands of domain owners, parking means they can monetize their domain assets without ever having to type a line of HTML code. Owners of parked pages love direct navigation users, because they drive high click-through rates on sponsored links.

Much of this business would dry up, however, if direct navigation users would simply learn how to use search engines. We can only hope. Or, Web browser makers could kill the business overnight if they stopped trying to guess the user’s destination, and instead used the keywords to open a search engine query so the user could choose a real destination.

In the meantime, it appears I may never own the domain I’ve coveted for the last five years. At least I own boobtubebook.com. And yes, this and several other domains I own are parked at Sedo.