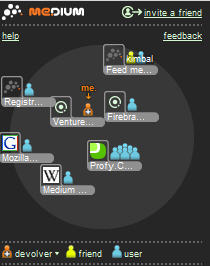 Boulder, Colorado-based Me.dium, which lets you see and talk to people who visit the same Web sites as you, has raised an enormous $15 million in its second round of financing.

The figure might seem staggering, considering Me.dium is merely a downloadable plug-in for FireFox. Once you install it, it tracks where you go on the web and lets you talk with other people who have also downloaded the plug-in — as long as they’re sitting on the same websites you land on (See the screenshot above. The orange figure is me, the yellow figure is a friend, and the solitary blue figures are sitting on sites that Me.dium recommends based on the one I’m visiting.)

We spent two hours browsing, and encountered only two other people, one on MySpace and another– a Me.dium developer –while browsing root.net. Me.dium only has around 15,000 users right now, and the odds of running into them are small.

So why would anyone bet $15 million on the future of a browser plug-in with a sparse user base?

Because Me.dium’s technology, by tracking people’s behavior, could become valuable to advertisers looking for more ways to target ads.

Me.dium is one of a number of companies, like Compete, Attention Bank, Cluztr, and, recently (and most notably) Google, that offer you a service in exchange for the right to track nearly wherever you go on the web. All of them use a downloadable browser plug-in to monitor your “attention streams” which are the trails you make as you browse.

These trails yield valuable information about you and your preferences, something that adware and spyware companies have sought to exploit. Behavioral ad networks like Tacoda and Revenue Sciences track you in order to targeting their ads more efficiently. But these companies’ products are not installed on your computer, and merely connect the dots when you land on websites with which they work.

Attention data, captured on your computer, can produce much richer results. Me.dium knows when you initiate a search and what you’re searching for. It learns your browsing patterns and connects you to people whose patterns look like yours. And it communicates this information to its server and to you in real time.

If Me.dium reaches critical mass, you could theoretically connect to anyone browsing, shopping, even searching for the same things you are.

To reach its goals, Me.dium is going to have to collect a lot of data. Google, with its Web History offering, is already collecting similar data. Me.dium simply ads an element of social browsing to make it fun.