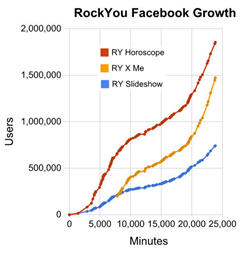 “The viral loop of people inviting each other to most social networks revolves around a user posting a widget to their page and having friends see their page.

The viral loops for Facebook (there are multiple) revolve around the news feed, the mini-feed and the invite request. Not around people coming to your page and interacting with it”

That’s Lance Tokuda, chief executive of RockYou, telling us in the interview (below) about one of the reasons why Facebook Platform is such a big deal for his company. RockYou provides widgets to social networks and other sites to help people personalize their online spaces. (Our most recent coverage here.)

Here’s a quick reminder about RockYou’s top applications on Facebook to date. The chart above shows the progress of three of them until yesterday (the curves are still climbing):

Horoscope (1,649,621 users)
Add this app to your web page and and get horoscope updates every other day (covering any of the zodiac signs).

X Me (1,207,575 users)
A new take on Facebook’s popular "poke" feature, the app allows for more action-based communication, for example "hug her, slap him, tickle them!"

Slideshows (649,993 users)
Turns Facebook photo albums into animated slideshows, including the option to embed a photo strip into your profile.

And here’s a Q&A VentureBeat had with co-founders Lance Tokuda (left) and Jia Shen (right):
. 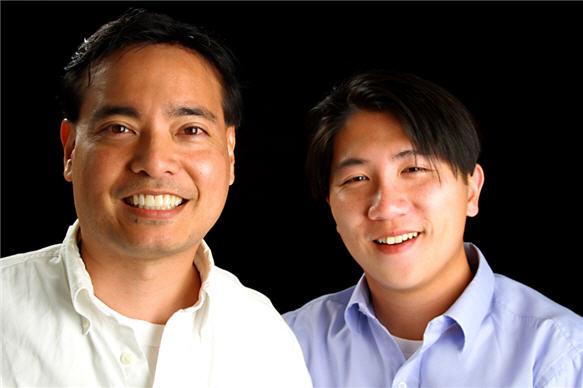 VentureBeat: First of all, I’ve seen that RockYou has three of the most popular apps on Facebook. Why is this?

Lance Tokuda: We’ve devoted significant energy to studying the Facebook demographic and running users studies on what is popular. We didn’t just port our Myspace features over to Facebook. We reinvented them for the new platform. That’s why we believe, for example, our slideshow is over eight times more popular than Slide’s with Facebook users. [Editor’s note: Slide has a separate application, Best Friends that has since become one of the overall most popular applications since this interview was conducted, currently with almost 2,989,431. That is a different story, which we’ll get to another day.]

Jia Shen (co-founder and chief technology officer): We really spent a lot of time, dedicating the entire company to making a very engaging initial product offering — [but] there’s no doubt that Horoscope got much bigger than we expected. There were a lot of challenges due to the fact that Facebook didn’t allow flash to play.

LT: Specifically, we interviewed Facebook users to see what their pattern of usage was. One thing we discovered is that the viral flow for Facebook’s platform is very different from the viral flow in other social networks. The viral loop in most social networks revolves around a user posting a widget to their page and having friends see their page. The viral loops for Facebook (there are multiple) revolve around the news feed, the mini-feed and the invite request. Not around people coming to your page and interacting with it. (There is a possible loop there but it is weaker.) X Me is an example of a viral loop driven by the mini-feed and the news feed. It has almost no presence within a person’s profile page.

[Editor’s note: A user adds a new app to their own profile, which generates a note in their mini-feed about doing so, which in turns gets rebroadcast to all their friends via the news feed. The more friends add the app, the more likely other friends will read about it in their own news feeds.]

VB: RockYou has previously relied heavily on Flash. For example, if a Myspace user goes onto a profile page with a RockYou slideshow, the slideshow will be triggered to begin playing. Facebook hasn’t supported auto-play. How has this affected you?

LT: The lack of auto-play with Flash almost kills the viral loop around friends visiting your profile. We’ve received a number of requests for this feature and we’re still hoping that Facebook will find an auto-play solution at some point. They are considering an opt-in solution. Without opt-in, I’m sure they would meet strong resistance from their loyal users. With opt-in, I think the experience might be positive by adding more engagement to their site.

VB: Is that what you’re advocating to them?

LT: They’ve mentioned to us it as a possible solution. In the end, it is [Facebook CEO Mark Zuckerberg]’s call and it’s his responsibility to create the platform he envisions for his users. Even without in-page Flash, Facebook is revolutionary in its virality.

VB: So what is it about Horoscope that made it so popular, looking back?

LT: We knew that the Horoscope would be popular due to the demographic and its growth on other networks. But Horoscope really took full advantage of the viral loop around the mini-feeds. We had no idea that the loop would allow for such rapid user acquisition.

VB: Have your other applications relied on news feed more? Can you compare the importance of each for the applications you’ve built?

LT: All apps are using the mini-feed and all the top growing apps are also using the invite request so it’s a combination of viral loops that is triggering the explosive growth of apps such as iLike and Flixster.

VB: Now that you’re getting all of these users, how are you going to make money from your apps? How will they evolve alongside the existing features on RockYou.com?

LT: We have different monetization strategies around different apps. Nothing we’d like to disclose right now. As for features evolving, our user studies show that some of [RockYou.com’s features] will convert well over to Facebook and others will require major investment which we are undertaking. Facebook created an open environment for monetization which we greatly appreciate. I’m sure sites will be testing multiple different models.

VB: How much of your company is still focused on Facebook vs. your other offerings?

LT: We’re investing a large portion of our resources, especially in this early stage when seeding is critical and the viral channels have not been burned out

VB: How do you see the viral channels burning out?

LT: With every viral channel: Email, Myspace profiles, Myspace bulletings, Facebook requests, Facebook mini-feed events, etc… the response rate will always be highest when the channel is brand new. As more and more sites use the channel, the user response rates will decrease over time.

VB: Do you see a tapering off yet on Facebook? What is the state of this effect on Myspace right now?

LT: Not yet but the platform was launched less than two weeks ago. On Myspace, the viral loop around the Myspace bulletin for example is much weaker. It was most viral in the first 3 months. One advantage that Facebook has around the feeds is that they have an algorithm they constantly tune which tries to optimize the ‘interestingness’ of the events in the news feed. If they do a great job of tuning the algorithm, it may be possible to keep the viral cycle alive indefinitely by only posting truly interesting events worthy of action.

LT: I haven’t seen Myspace heading in this direction. They’ve been open to other sites and they’ve looked for acquisitions of strategic assets (e.g. Photobucket and Flektor).

VB: Do you see a flow of users from Myspace to Facebook? Is RockYou part of that flow, at all? Do people start on Myspace, then go to RockYou, then go to Facebook? Or simply, do you see RockYou driving traffic to Facebook at this point? do you expect it to more?

LT: I’ll let the Alexa and Comscore numbers speak for themselves. We don’t track that particular flow but I can tell you that on average, our users have at least two online profiles in different networks. We see RockYou as facilitating the personalization of your profiles, wherever they may be. It is up to the user to decide where they want to go.

My belief is that multiple companies will invest significant efforts to leverage the platform [that Facebook has] created. Ultimately, that will translate to a better experience for Facebook users that could not be achieved by Facebook alone. The fact that they are open to people monetizing makes Facebook a viable platform for growing a business. It’s brilliant.

LT: That’s a good question for Facebook. I’ve already seen some audio applications that are both popular and appear to have copyright issues. We’ve just signed with Fliptrack, Snocap, Nettwerk Records, and Pump Audio to provide legal music content to our users on RockYou.com.

We’ve got music on RockYou.com and our slideshows can be embedded in Facebook by our users (with legal audio).

VB: Any new apps on the way, or changes to existing ones?

LT: We just launched Games on Friday night and have over 40K users in the first two days. Facebook has the only platform where acquiring 40K users in two days is our expectation.

This space is so viral right now, we’ll let you know as soon as we launch more.