Advertising services company Exponential, best known for its Tribal Fusion advertising network, is introducing a free ad server for online publishers called Expo9. This software now allows publishers to manage multiple ad campaigns running on their sites and to prioritize ads based on how much money they are making,

The announcement is significant because it is the latest move by a big player in the mad rush to grab a gatekeeper role in the huge multi-billion dollar ad industry — which is being transformed by the Internet. Tribal Fusion is the number-four ad network in the country, right behind Advertising.com, ValueClick and Yahoo. It runs ads on valuable niche-audience sites, such as political blog The Drudge Report, investor site Money.net and extreme sports site Snowboard.com. Advertisers using the service reach over 65 percent of all internet users through CPM ads, or 116,051,000 out of 178,079,000 total, according to Comscore (scroll down).

This move follows a Jupiter Research report released yesterday saying that online advertising revenues will grow from $19 billion this year to $35 billion in 2012. Exponential is exploiting the size and breadth of offerings to stay relevant as the market continues to grow, and competitors like Google and Yahoo buy or build their way into more and more advertising markets.

Expo9 will help Tribal Fusion’s existing advertisers and publishers use more of Exponential’s services to make money from their sites. For example, a publisher could use it to make a particularly successful banner ad run more often, in a more prominent position on their site.

While Google’s Doubleclick and other large networks also provide similar ad-server services (albeit not for free), Expo9 will now tie together Exponential’s other tools. It has integrated features for managing specific ad information such as date/time of ad run and geographically targeted locations, and for offering rich media ads. It also connects to Tribal Fusion’s banner advertisers and EchoLink’s contextual, in-text advertisers. The company is hoping that publishers will run more of Exponential’s advertiser’s ads, and more profitably.

The company says that Expo9 has been beta-tested with more than 100 publishers over the last several months and is serves more than 20 billion ads per month through Tribal fusion; it will be rolled out to more publishers beginning in July.

Exponential was founded in 2001 and is based in Emeryville, Calif. It has not taken on outside investment. 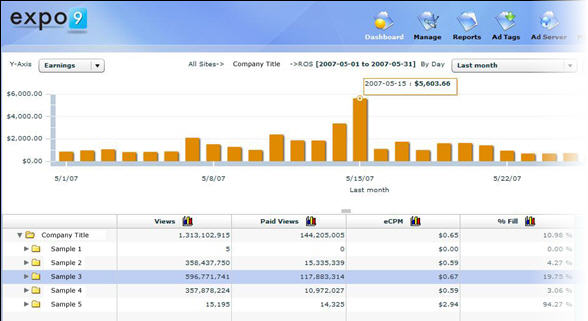 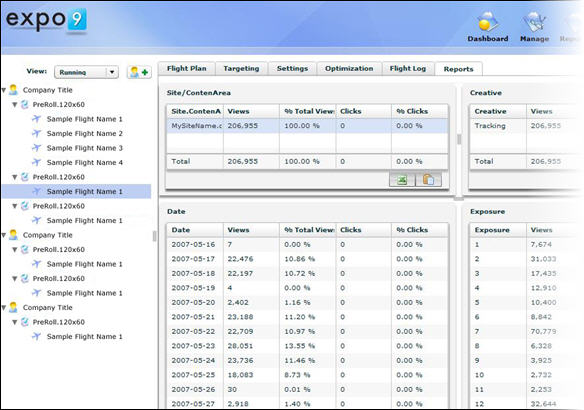