Brad Greenspan, the jilted MySpace executive, makes play at WSJ — Greenspan, who filed a suit against MySpace’s parent company for ripping off shareholders in its sale to News Corp. (the suit was rejected), is now seeking to buy the WSJ’s parent company Dow Jones. Of course, this continues the rivalry between Greenspan and News Corp’s Rupert Murdoch, another bidder for Dow Jones.

Heads rolls at VC lobby in London, now attention moves to Washington: The CEO of the British Venture Capital Association, Peter Linthwaite was forced to resign after a dismal performance in front of Parliament defending a loophole that allows carried interest to be taxed as capital gains at 10 percent rather than income at 40 percent (more details here in NYT). This comes as the issue heats up on this side of the Atlantic, with Congress taking a deeper look at whether private equity professionals — including possibly Silicon Valley’s venture capitalists — should be paying more tax.

WeFi offers a useful way to find free WiFi hotspots — Several sites let you find WiFi spots, including Jwire.com. However, for the most part, they’ve lacked a social component, and WeFi fills that void. Started 18 months ago by Arnon Kohavi (chief exec), Yossi Vardi and Shimon Scherzer, the company offers a download that lets you discover and connect to nearby free WiFi spots. A map displays the location of other WeFi users (users add the location themselves) and this info is updated every 15 minutes for all users. The Mountain View company has an R&D center in Tel Aviv, and is funded with $7.35 million from Lightspeed Venture Partners, Pitango and Gemini. Kohavi tells VentureBeat the service has gotten a lot of initial downloads since launching a press blitz earlier this week. This is useful for those people spontaneously on the go.

However, we see a long slog ahead for this company. There are so many free WiFi spots already, and even paid ones that offer value (we have a Starbucks account, for example) that it will be difficult to convince existing providers to opt into its platform. Only then can it start serve advertising to make money — and this, arguably for some, degrades the free WiFi experience. Kohavi says he may be able to convince WiFi providers to switch, if he can show them how to make more money. It’s also a tough slog because other services, such as Whisher, hope to let people connect for free, and to serve advertising as well. Kohavi says he’s now considering using the service for hooking up people seeking dates, or gaming partners.

Google approaches 3rd anniversary — And that means more exodus of talent is likely. Employees still holding pre-IPO shares will be completely vested on August 19, meaning they no longer have to stay in order to be able to cash in their stock.

Truphone, a UK-based start-up offering a VoIP download for mobile phones, gets kicked around by T-Mobile UK — Truphone makes it easy to make cheap calls over dual-mode (VoIP/cellular) phones. T-Mobile is refusing to connect calls from the company.

Imeem launches first ad-supported online music service — We wrote about Imeem’s plans several months ago. It has now launched, and compensates artists when their music is streamed on Imeem. It launches with 5,000 record labels with 3 million tracks. This is the company sued recently by Warner. 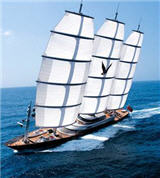 Odd turns in the story of Tom Perkins, the founder of Kleiner Perkins — Kleiner Perkins Caufield & Byers is, along with Sequoia, one of the two most storied and successful venture capital firms in Silicon Valley. Founder Tom Perkins’s monster yacht, it turns out, cost $130 million to build (see Newsweek story by David Kaplan), the most expensive sailing craft ever. That’s up from the $100M we reported last year. More bizarre, however, are the events from 11 years ago, only now showing up in his published memoir. He was racing his yacht off the French coast when he capsized a smaller craft, killing a doctor on board. “I was arrested and tried in a foreign court in a language you don’t understand, by judges indifferent – or worse – to justice, represented by an inappropriate lawyer with the negative outcome preordained,” Perkins, 74, wrote, according to PageSix. Author Danielle Steel sat in court with him.

Another great post from Netscape co-founder Marc Andreessen — This one is about what it’s really like to start a company He has good line about the euphoric up days and the catastrophic downer days that seem to plague a founder’s early days.

YouTube released in nine languages — This is about time. Home grown competitors in France and Germany, such as DailyMotion, are gaining footholds.

YouTube Mobile released — The carrier-agnostic version is finally here. But YouTube is still selecting the types of videos it shows, and so will frustrate some. FAQ here. Moreover, YouTube will begin encoding videos in a higher-quality format for the iPhone. Some 10,000 videos will be prepared in the H.264 format for the iPhone.

YouTube launches online video editing tools — They are basic, but basic is what most creators of YouTube’s grainy two-minute videos really need.

LongJump offers ways for non-programmers way to create applications — There are plenty of competitors, however, so this isn’t particularly new. (More details here).

Simple Spark offers a catalog of Web 2.0 products — It makes them easy to find for mainstream users who aren’t versed in the new ways. Searches for Flicker will turn up flickr, delicious will turn up del.icio.us, etc. It offers a concise description of each application. Despite an orderly interface, however, the options remain overwhelming. See this catalog of photo companies, for instance