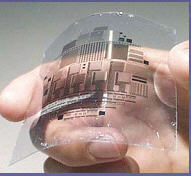 The flexible chips industry doesn’t grab a lot of headlines, but it is bringing together nanotech, biotech, and other technologies to possibly usher in some revolutionary new products.

We’ve been quietly checking up on some of the venture-backed companies in this area, including NanoGram, Plextronics and Plastic Logic. They are few, and slow-moving, but worth a look.

Their potential applications sound straight out of sci-fi: interactive displays embedded in anything from clothing to wall paper, newspapers that update in real-time, soldiers wearing camouflage that changes color with their surroundings. There’s hype, too. Last month, the Seattle Post-Intelligencer newspaper dismissed a report saying it was looking to test flexible “e-paper.”

However, with the right high-tech materials and machines, semiconductors can be deposited on highly durable, flexible and — importantly — cheap substrates like plastic, often replacing silicon and glass. See this picture below. 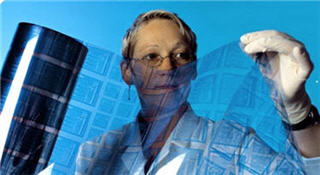 Those inky looking things are circuits. Instead of the highly complex, capital-intensive fabrication process used today, printed electronics, in a way similar to newspaper printing, uses a roll-to-roll method, literally printing circuitry on the material as it scrolls by.

The near-term applications of flexible electronics will dramatically reduce the cost of radio frequency identification (RFID) chips, with most people expecting these RFIDs will be as prolific as bar codes are right now. Other players are making lightweight, flexible and relatively cheap solar panels that can go nearly anywhere. Later on, these flexible solar panels could actually bend to follow the sun as it tracks across the sky.

Then here’s military applications, where flexible electronics could enable soldiers to shed as much as 20 lbs of equipment, with GPS, threat detection, and health monitoring systems built into their clothes. 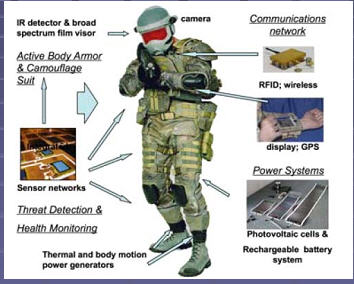 Pittsburgh’s Plextronics uses organic polymers for substrates and aims to combine light, power, and circuitry in one tiny device. The company has raised over $16 million from Birchmere Ventures, Firelake Capital, and Draper Triangle Ventures. One of its major clients is PolyIC, which prints the chips, is the product of a joint venture between Siemens and Kurz. Milpitas, Calif.’s NanoGram, though technically not a start-up, changed its direction in 2004 and has since raised $25 million from a number of investors, including Technology Partners, ATA Ventures, and Nth Power Technologies. It is taking a different approach than most other companies in the field and working with silicon instead of plastic. It has recently partnered with a manufacturer in Japan to work on producing materials for flexible displays. Some other start-ups working on materials for flexible circuits are Guided Particle and Polyera.

The industry is in its infancy. In the last three years, $350 million in venture funding has gone to companies working in the field, and $100 million of that was invested by Oak Investment Partners and Tudor Investments in UK’s Plastic Logic for their production facility in Dresden, Germany. But compare that $100 million to the $2-4 billion spent on silicon wafer production facilities — and the room for growth in flexible electronics becomes clear. Polymer Vision, a potential competitor, has raised $21M (see alarm:clock euro).

Some big companies are already active. Sony and LG.Philips LCD have made announcements, and Motorola was one of the presenters promoting printed electronics at a recent conference organized by the U.S. Display Consortium.