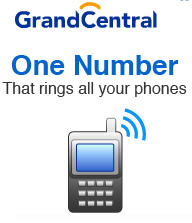 Google is in acquisition discussions with telephone management startup GrandCentral, according to Techcrunch.

GrandCentral gives you a single phone number that you can use for all your phones. You can carry it for life. It is a powerful concept — even if it requires you to sign up for yet another number when you may be happy with you existing ones.

Despite the additional number, it may actually simplify things. You can manage everything from a central dashboard online: You can choose which phones (cell, home or work) you want to route calls to, depending on who they come from. You can have the call ring to your work phone, for example, if it is someone from your general Outlook contact list (which you can import), or someone you don’t know. If it is a “friend” calling, you can have the call ring your cell and work phone; if it is your wife, you can have it ring to your home phone as well.

We first reviewed the Fremont, Calif. company here. The company has raised less than $6 million in capital from Minor Ventures.

This comes after Google’s GTalk service hasn’t seen very robust adoption, even as Gmail has seen wide adoption — in part because of GTalk’s confusing interface. An acquisition could help give Google some heft in the voice market. Mike Arrington says:

I’m speculating on where Google will use GrandCentral, but the synergies with Gmail and GTalk are fairly obvious and could be the next step in Google’s competition with Skype and other instant messaging platforms.

We have not been able to reach Google or GrandCentral for comment, though will update as necessary.