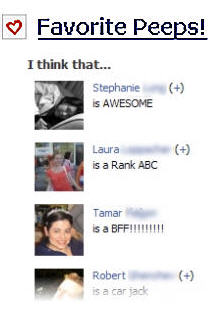 Slide, the San Francisco company that lets you create photo slideshows that you can embed in blogs and other sites, has acquired a specialty company called Favorite Peeps. While the purported purchase price was piddling, it suggests a land grab may be under way by companies developing applications for Facebook.

Favorite Peeps is a “widget” — a box in a Facebook user’ that lets you choose your favorite friends and give them a nickname. See image at left. It was built especially for users of Facebook, who can then put the widgets prominently in their profiles. It had become immensely popular, ranked #14 among Facebook applications — not bad, considering it was built by a single developer, Dennis Rakhamimov, a software engineer at Palantir Technologies. That company is backed by Facebook investor, Peter Thiel, incidentally.

Facebook-focused blog, Inside Facebook, reports the purchased price was $60,000. Slide confirmed the acquisition for VentureBeat, although they did not confirm the price. Like Slide’s own Top Friends application, Favorite Peeps allows Facebook users to feature their favorite friends (or top “peeps”) on their profiles.

Favorite Peeps currently has around 1.3 million users. As Inside Facebook points out, this purchase price values each of its users at around $0.046 — or not very much at all, considering companies like Xfire have been purchased at a price of $25 for each of its users.

Top Friends, which is very similar, has nearly seven million users — the most of any Facebook application. Fortune Cookie, which provides users with fortunes about themselves, has nearly four million users.

We interviewed Slide chief executive Max Levchin Friday, and he wouldn’t comment on whether they were considering purchasing other Facebook applications. The company did tell us, however, that there has generally been a lot of “discussion” between various Platform developers.

Inside Facebook also reported last week that travel-focused startup SideStep purchased the Extended Info application, for an undisclosed amount. Sidestep also has its own application, Trips — each of these applications has around 130,000 Facebook users.

Separately, we’ve heard from other cash-strapped developers with successful Facebook apps that they are also interested in getting bought.

We have also been hearing that some companies looking to grow their presence on Facebook through their applications are seeking to hire successful Facebook platform developers directly, in an effort to incorporate the developer applications into their own offerings.

As Robert Scoble points out, Inside Facebook is an example of “the rise of Facebook blogs.” In fact, he’s an advisor to the Facebook group of another blog, called FaceReviews, that, yes, reviews new Facebook applications.