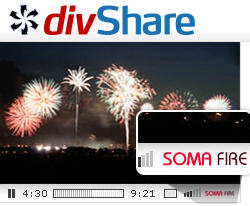 DivShare, an online file hosting and sharing site, would be just another of the many in the market if it weren’t so well done (and free).

DivShare offers unlimited hosting for any file type, and has its own embeddable flash players for photo slide shows, music, and videos. So once you’ve hosted media files on DivShare, you can put them on your own website, blog, or social network profile. This flash player offering sets DivShare apart from the also-free MediaFire, which allows you to embed links to folders full of files and full-sized photos. It should be noted, however, that MediaFire’s growth has been tremendous; it reached 300,000 registered users since it launch last Fall (see Hitwise chart below.) 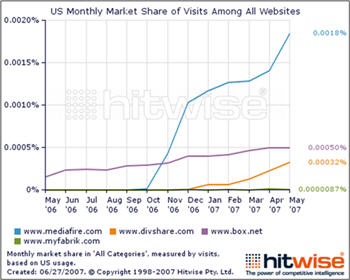 Traffic is a useful gauge because it is one indicator of popularity, and some sites depend on it in part for advertising revenue.

However, traffic is not everything. The graph indicates that Box.net is getting much less than MediaFire, with DivShare closing in, but Box offers widgets that do not require users to visit the site. MyFabrik, which recently raised $24.9 million with plans to branch into the consumer market, appears to have been left in the dust. But the last time we covered this sector, we found a VentureWire article saying Fabrik has revenue of $150 million. That’s high. It’s also suspicious, and could be wrong, because the company’s private itself is valued at $150 million, suggesting a revenue much lower than that (sorry about this, VentureWire is subscription only). We don’t know what to make of its low traffic.Fabrik has declined to talk about its revenue

It’s hard to believe that any new entrants would have a shot in an area packed with contenders, but being free seems to pack quite a punch. The self-funded DivShare, which consists of two 22 year-olds based out of a beach house in Delaware, has reached eight million pageviews per month since its December launch. The company relies on advertising to keep itself free.

Earlier this month, DivShare released a simple but clever paid service that enables you to add your logo to brand its flash players as your own. For prices ranging from $5.00 for 5GB to $50 for 70GB, you can store the media that you want to bear your brand.

And yesterday, DivShare changed this arrangement to allow you to move files back and forth between your previous free account and your branded account . Now, if you don’t mind moving files around a lot, by transferring unneeded files from the paid storage back into your free account, you won’t have to pay for more space.

Until midnight tonight, DivShare is offering one month of its paid service for free. 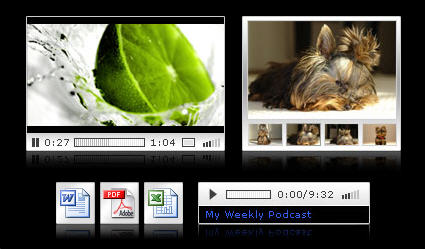