Free mobile calls, via texting — An Ottawa company called bOK is using VOIP to give Canadians free mobile calls, using SMS. Here’s how it works: You send a text message with your contact’s phone number to bOK, and, just like better-known JaJah, bOK calls both parties — voila, free incoming call!

The service is temporarily free for any phone number in the U.S. and Canada. Anyone with a US-based phone plan, though, can expect to use up minutes. The service will work in Canada especially well, where many carriers offer plans with free incoming calls. The company charges for international calls at standard VOIP (low) rates. Maybe those with friends and families across the Northern border will appreciate this service? You do have to provide your phone number and other considerable data (from birthdate, to address), which is a downside.

The self-funded company emerged about a month ago and now says it has handled 10,000 calls and is breaking even; it hopes to raise a venture round shortly. Besides Jajah, other companies trying to redefine telephony include: Mobivox, Talkster, Truphone as well as Skype. bOK has decided to enter a very crowded market pretty late in the game, never mind any future legal issues. We like what it does, but wonder about its chances for success.

After patent score, Jingle makes a deal — Jingle Networks, the operator of a free 411 service, has partnered with Internet calling company Skype. In the US, Skype users will be able to use Jingle for 411 calls, and add “Free411USA” to their Skype friend list so they can call for a 411 operator — if they are on Skype version 3.5 for Windows. Jingle’s patent is for ad-supported calls, for when you don’t want to use a search engine on your web browser.

Local.com gets own patent for voice and mobile for directory-search assistance — Local.com, based in Irvine, Ca., was awarded a patent for a method of searching local directories on a pay-per-referral basis where users receive results via an operator call, SMS or a number of other options. It includes an ad model, and comes on top of another patent it received in local search last week. Previously-mentioned Jingle also offers SMS-based advertising; Microsoft’s TellMe and Google’s Voice Local Search, are also in the market.

Mister Wong, a clone of Delicious, launches private beta in U.S. — Oddly named German company Mister Wong is arriving Stateside. You’d think it would be called Mr. Schmidt or something. Next, here’s the dirt on this quirky sounding company: 1) It successfully copied the bookmarking site, Delicious, and developed a stable base in Europe; 2) It is trying to use this base to gain a foothold on the US; 3) We’ve heard that Delicious hasn’t grown much since it hit the 1 million mark last year. We’ll be watching to see if it goes anywhere. What we won’t be watching is the Alexa graph that Mister Wong provides on its splash page, comparing itself to such companies as gnolia.com, spurl.net and furl.net (see above). (More from Mashable)

South Korean search co. rules South Korea — Naver.com is the South Korean search engine of choice, and benefits from user participation in search results. While it handles more than 77 percent of all Web searches, search giant Google handles just 1.7 percent. The site is entirely in Korean; as far as long-term plans go, we can only assume that the company is aiming north.

Facebook traffic numbers are up 89 percent this May versus a year ago, according to Comscore — This isn’t surprising news to anyone who has been tracking Facebook for the last year, as the company has been disclosing its internal numbers (if those are to be believed, the site now has 28 million active users). We referenced the trend in March:. The most notable recent development: A huge chunk of new traffic is now coming from over 10 million adults ages 35 and up. This data may be suspect though because of a methodology problem: Total users don’t equal sum of the age segments listed (there’s a 1.2 million user difference). If true, it still suggests older people are joining, even though the site started in college campuses. Now, Mom and Dad apparently want to see what their kids have been up to for the past few years. Techmeme has more blogging about these numbers. 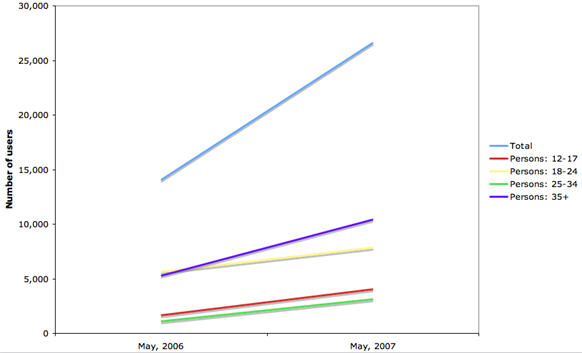 Facebook Apps are getting translated — Facebook-focused blog Inside Facebook, points to an application, Nestoria, that’s entirely in Spanish, possibly the first non-English app. Facebook itself is currently English-only, although as more people have joined from around the world, they’ve brought their languages with them (like this Facebook group called I LOVE LEBANON). As the post notes, the company is trying to hire somebody to build out localized versions.