Fotoflexer joins the growing ranks of free, web-based photo editors. However, it allows you to make higher-quality edits than what most online competitors offer. You can use it to re-doctor a photo of yourself, to change your eye color, the size and shape of your face — or any body part, for that matter.

The Berkeley, Calif.-based company hopes to appeal to casual users of social networks and other sites where photos are displayed — places where it doesn’t hurt to make yourself look a little better, or weirder. See image below of how a scrawny runner is transformed into a muscle-bound hunk, for example. The technology is developed by a current and a former UC Berkeley PhD students. Its based on an algorithm that classifies the pixels in an image according to coloring and detailed information about each pixel.

In addition to the stand-alone site, the company has also built a Facebook application where users can edit photos from their photo albums without having to leave the network. The company, which has no funding, is very early. It has 7,000 users, but the number has grown steadily over the last month.

The interface needs polishing and bug removal. One box with directions remained stuck halfway off-screen for me. For one feature — a way to selective recolor pixels (like all of your teeth but not your mouth) — you go through a seven-step process. Step five is fixing problems created by the algorithm selecting pixels for editing that it shouldn’t have. For example, in this photo, one can see some pixels on the cheek have turned purple when only the teeth were selected. 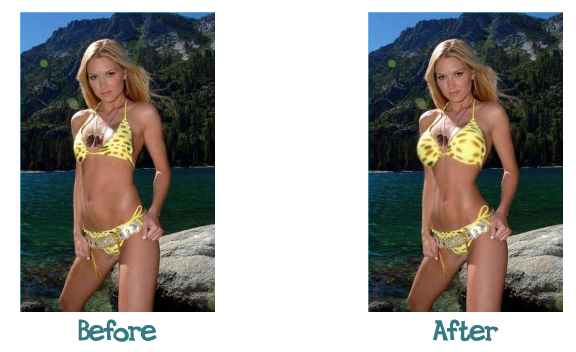 The online photo market is crowded no matter how you crop it. A long list of startups provide free, online image-editing services. Some of them, such as Snipshot, focus on simple tools for cropping and re-arranging photos. In particular, Fauxto is trying to bring sophisticated image editing on the web using Adobe’s Flash-based Flex2 development platform. Adobe itself said in late February it will soon launch its own online version of Photoshop — the most popular professional photo-editing software around.

Fotoflexer, too is based on Flash and Flex.

The company hopes to add a contextual ad model: If you’re editing your teeth, for example, it may show you an ad for toothpaste. This is similar to what Adobe and the other startups are aiming for.

Considering the competition — and the job market for software developers — we wouldn’t be surprised if a social network or other media company snaps it up quickly.