Slide, Rockyou and HotorNot, three companies with the largest number of users on Facebook, are showing continued traffic growth on their own sites. 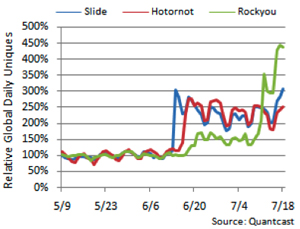 The finding, reported by Quantcast, a service that tracks traffic trends for Web sites, suggests that sites failing to embrace Facebook may be missing out on potential growth.

For some, this is also encouraging evidence that Facebook’s platform, launched in May, isn’t necessarily weening users entirely off their own Web sites. While Facebook allows third-party sites to advertise on their applications on Facebook, many sites prefer to maintain control over their users’ experience, and are hesitant to trust Facebook’s promise that it will remain hands-off. Despite the pledge by Facebook’s executives that sites are free to make money on their apps within Facebook, its terms of service says Facebook can change its policy at any time. 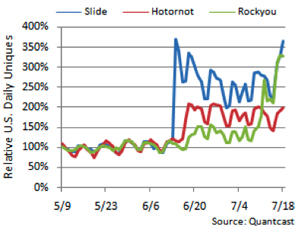 These graphs show the rate of growth that each company experienced to its .com site since . We’ve been hearing the same thing from developers of other successful Facebook applications who also have freestanding sites. Example: a Facebook application for anonymous gossip, Socialmoth has been driving traffic to its previously launched Socialmoth.com.

However, Slide also tells us that they’ve been seeing double-digit growth to Slide.com for months — that site whent from 117 million unique viewers in April to 129 million in May; Facebook’s platform didn’t launch until late May. Also, HotorNot.com has been undergoing some major changes over the past couple of months.

Each of these companies make money by running ads on their freestanding sites. They are also already experimenting with new ways to monetize both in and out of Facebook.

RockYou, for example, has been running ads in Facebook, within its casual gaming application “Games.” Slide, meanwhile is working on big plans to use the data it collects about what its users like in order to develop better tools for predicting other things they will like.

Then again, some sites don’t seem to care. iLike is another company with both leading Facebook apps and a quality, free-standing site. Its chief executive, Ali Partovi, says he doesn’t seek to drive traffic to iLike.com from Facebook. That’s because ads in Facebook may in fact be more targeted and thus more lucrative. Facebook pages include basic personal information on people, such as age, location, gender. To this end, iLike has made changes to its free-standing site that it knows will slow growth in order to boost growth on Facebook.

This data also justifies these companies’ land-grab approach to Facebook. Each has been launching as many apps as possible, cross-selling their users internally between their own applications to drive up overall growth, and buying other applications or hiring those applications’ developers into their companies.

It also may add more fuel to the fire driving many developers to build applications within Facebook. (For a more heart-on-sleeve explanation of how it makes developers feel, see this post.)

So what’s happening on other sites that these companies are pulling in users from, such as Myspace? RockYou’s traffic throughout all other social networks has been holding steady “in comparison to Facebook where it has been exploding,” company chief executive Lance Tokuda told us.

Where does this leave Facebook? Are these companies driving additional traffic to Facebook through their sites and their apps? Facebook tells us this is may be one of many factors. It is now at 32 million active users, and still doubling every six months — it attributes its recent growth not only to the platform launch, but becoming more of a hit with international audiences (London recently overtook Toronto as the city with the most Facebook users). It has also been introducing ways to more easily import contacts from other sites. For example, its AOL contact list importer, which was introduced only earlier this month.