TheFunded.com, a forum that lets entrepreneurs dish dirt publicly about venture capitalists, has taken another step toward accommodating the VCs.

The site now lets VCs provide feedback on any public comment made about their firm. Initially, TheFunded had banned VCs from commenting. Recently, it relaxed that stance, letting VCs provide comments on other funds, but not on their own. This latest, second step is an effort to get VCs engaged with the site.

However, it is still causing angst among VCs. The image above is the headline of a recent comment left by an entrepreneur about Sequoia.

There’s a condition imposed on VCs wanting to leave responses to comments: They must have a “certified profile.” To have a certified profile, a firm must provide the TheFunded with certain data about itself, such as an overview of its focus, names of its partners, and so on.

In addition, comments can only be left in response to other public comments. The “eat their own young” comment happens to be private, and so Sequoia can not respond. It’s not clear which comments are left public, and which ones private.

The recent move to let VCs respond to public comments was inspired by Draper Richards’ Howard Hartenbaum, who pushed TheFunded to introduce the feature, says TheFunded’s founder, who says he wants to remain anonymous for now, but lets us call him “Ted.”

He said Sequoia, one of the top venture firms, is playing along. Sequoia’s public relations person Mark Dempster engaged in a series of emails looking for ways to let Sequoia solicit feedback and respond to the comments being left, Ted said. We contacted Dempster last week for comment, but he did not respond. Sequoia has provided the data necessary to certify itself. Here’s Sequoia’s profile.

Below is a screenshot of the first couple of comments when we looked on Thursday. You’ll see that both of these headlines are public, but that the specific comments are accessible only by members only. Membership is free for all CEOs and founders. Entrepreneur “advisers” and “lower level managers” can pay for access. VCs don’t get access.

It’s surprising that Sequoia would choose to play along with this site. (See our disclosure about possible conflict here.) 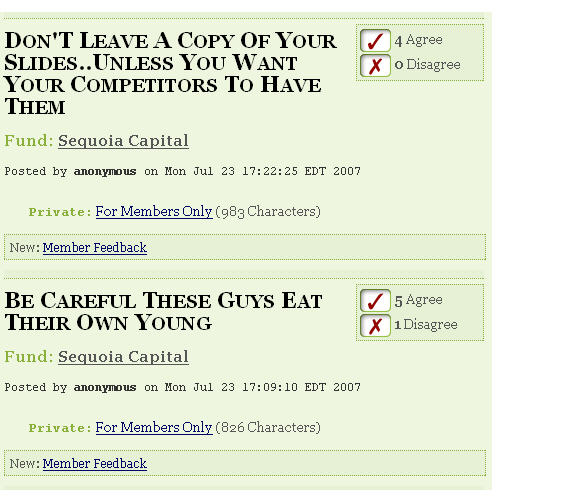