Associated Content, a company that delivers all kinds of information online, from movie reviews to tutorials about how to fix a kitchen sink disposal, has raised a $10 million in a second round of funding.

Associated Content is notable because its branding is all but unknown, but it is drawing five million unique users and 12 million page views monthly — almost entirely by tinkering with its content so that it appears high in search engine results. The site has almost no return visitors based on loyalty. The traffic data comes from the company’s chief executive Geoff Reiss, and is based on his reading of Google Analytics. 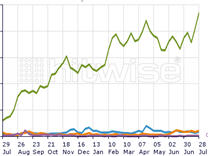 CEO Reiss tells VentureBeat the site is using a mixture of “best practices” for search engine optimization (SEO), such as labeling articles with various tags on its pages to better bait the main search engines like Google. Timing of the news, which follows on the heels of an announcement by news site NowPublic that it had raised $10.6 million, is purely coincidental, he said. Canaan Venture Partners, a Silicon Valley venture capital firm, led the investment in the Denver/New York-based Associated Content. Existing backer Softbank Capital participated, as did Tim Armstrong, a Google executive. The company raised a $5.4 million first round last year.

Reiss told VentureBeat he does not see NowPublic as a competitor. News is only one component of Associated Content’s offerings. AC draws content from specialists in any field, and content can be text, audio or video. While it has fewer contributors than NowPublic (70,000 compared to 118,000), AC’s contributors go through a more rigorous sign up process, and tend to stick around longer, he said. AC has more traffic. AC’s content focus is extremely broad, in our view, and its difficult to see how they will establish loyalty through branding. Reiss said establishing such branding is a goal of the company going forward.
. 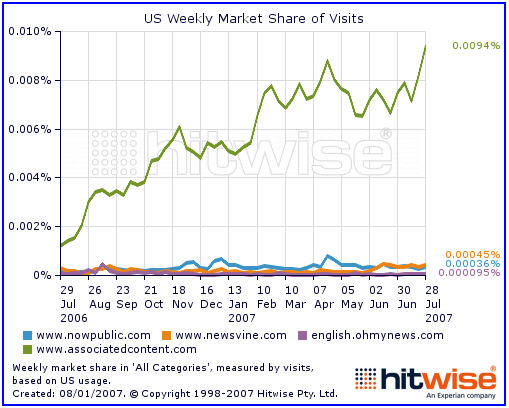