TeeBeeDee is the latest social network catering to a special demographic: those aged 40-plus.

MySpace has got the teens. Facebook has the 20-somethings. Friendster says it has bagged the 30-somethings. And on the other end, you have Eons, for the 50-plus generation.

So you knew this 40-plus angle was coming. The San Francisco company has just raised $4.8 million in a first round of funding led by Shasta Ventures, and joined by Monitor Ventures.

It’s a pretty straight-forward social network. It features discussions, and questions and answers about the usual topics, from sex to stress. People with top answers get ranked highly, along with their mug shots, and therefore there’s an incentive to play along. Member create profiles so they can network.

The company was started by Robin Wolaner, an entrepreneur who is the founder of Parenting Magazine, former executive of CNET Networks, and author of Naked in the Boardroom: A CEO Bares Her Secrets So You Can Transform Your Career.

The name TeeBeeDee comes from the acronym “to be determined,” which the company says reflects its view that the next phase of life is “full of opportunity.” The site says it plans a full launch in September.

The desire people to express themselves and feel belonged somewhere online continues to surprise us, so we’re not going to dismiss this company as an also-ran, despite its relatively late entry. However, this particular demographic of 40-something is a difficult nut to crack. People in their 40s don’t want to be reminded of their age. They’re having fun, and they want to feel part of the Facebook crowd, or at least be allowed to associate with groups that embrace those younger than they are. On the other hand, they’re the mid-life crisis bunch, and may be seeking counsel in areas they haven’t before. 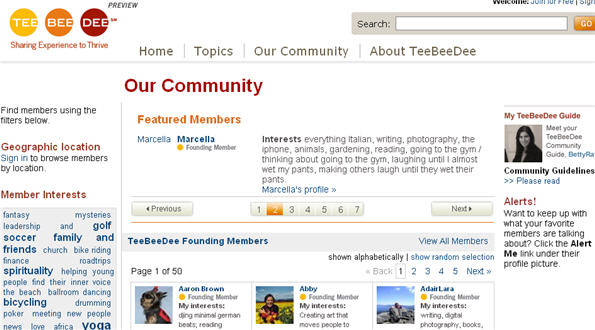