RotoHog, a site with an original approach to online fantasy sports, has raised $6 million in its first venture round.

There’s no revolutionary technology here; it’s just an effort to enhance an existing concept, and reflects the significant push to make money entertaining the masses who are spending ever more time online. For those who aren’t familiar, fantasy sports are like massively-multiplayer online role games, except for sports nuts instead of geeks. Fans spend multiple hours in front of their computers, building and managing teams.  The point is to win bragging rights, and, if you’re willing to pony up an entrance fee, some real cash.

In the standard fantasy sports scenario, like those you will find online at ESPN, CBS, or Fox Sports, you set up a league with 10-12 friends or internet strangers and spend a few hours drafting the teams. Throughout the season, trading players can be an irrational process, where people over-value players for emotional reasons. In cash games, it can even be corrupt, when a losing competitor trades high value players to potential winners in exchange for a piece of the pot.

RotoHog, however, is different in a number of ways. Its two main hooks are its drafting method and trading system. In most fantasy sports, the drafting order is arbitrary and therefore unfair. RotoHog seeks to change this by creating chaos: After a countdown, the draft begins for everyone at the same time; and people draft players by clicking on them before anyone else. It’s a mad rush that in theory gives everyone an equal shot. Each draft round lasts two minutes, and the whole thing is over in 25 minutes. This is significantly faster than the traditional method, which gives each player two to six minutes to make each pick.

The trading system also strays from the norm: Instead of inflated values set by an individual manager’s perceptions, the value of players is based on supply and demand. RotoHog has a “trading floor” that functions like a stock market, where prices for players rise and falling in real time. This eliminates the possibility of collusion, and gives everyone the chance to build a winning team.

The $100,000 cash prize “Marshall Faulk League,” which pits your team against every other team on the site, is free, setting RotoHog apart from companies like the Ultimate Fantasy Football League, where prices range from $40 to $300, depending on how many teams you want to manage at the same time.

RotoHog plans to make money through advertising, premium services, and small contests — the precise nature of which the company has yet to flesh out.

The funding was co-led by DFJ Dragon and Mission Ventures, with contributions from Allen & Co. and SCP Worldwide. 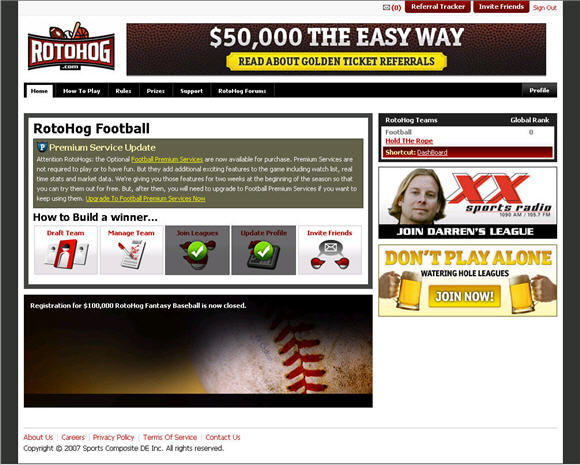