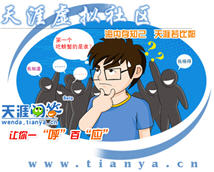 Google buys stake in China’s Tianya, launches two Chinese social sites: Google has invested in Tianya, a Chinese online community of twenty million registered users. A Google spokesperson confirmed the investment with VentureBeat, but didn’t say how much of the company it now owns. Reuters has more. The two companies also announced the joint launch of two services that compete directly against offerings from dominant Chinese search rival, Baidu.

The other service, Laiba, is an online community that combines a message board and social networking features to help Chinese users connect with friends and share content.

Google tells us that both Tianya sites will be “powered by Google technology” but “are Tianya services, not Google services” — which could be a way for Google to have Tianya do the dirty work of censoring its Chinese users.

Google to invest further in China? — The above news follows reports last week that Google Inc. was planning to acquire one or two Chinese companies and invest in up to five more over the next year as part of efforts to gain ground on rival Baidu.com Inc. in China. “Over the next year, Google will acquire one or two companies in China, and invest in four to five companies,” said Kai-Fu Lee, president of Google China, quoted by PC World, citing a Chinese report. The report didn’t disclose specific company names. Google has already invested in Xunlei Networking Technology, a Chinese peer-to-peer file sharing Web site, and has a mobile search deal with China Mobile Communications, as well as a search deal with Sina Corp., China’s most popular portal.

Google’s gDrive may be alive? A YouTube video allegedly made by a Google employee suggests that Google has developed but not released a service that would allow users to store large files and other data using Google servers. More on this rumor at the blog Google Blogoscoped.

Frucall, the mobile phone that lets you compare prices while shopping, provides automated updates — We noted the company’s comparison shopping service previously. It has added a few new features, including wish lists, and an automatic alert when an item you’ve previously searched for is listed somewhere at a better price.

PubMatic latest online advertising company for blogs and other sites — PubMatic may be a useful service for small and medium-sized publishers who want to maximize the revenue they get from ads. PubMatic tracks four networks, including Google, Yahoo, Komli and ValueClick, and conducts an auction among them, bringing in the highest-paying ads to run on the publisher’s site. This is difficult to do, because most networks don’t provide that data real-time, but PubMatic tries to check as often as it can. The company also looks at the layout of the ad space, environment and other factors (such as color of background, time of day and geographical location your reader is coming from) on your site, and tries to pull in the best ad to match that setting, said co-founder Rajeev Goel. The four networks offered aren’t very high-paying networks, but Goel said he wants to add more networks.

Co-founders Rajeev and his brother Amar, have raised a seed round Draper Fisher Jurvetson and Helion Ventures. Rajeev is based in Menlo Park, Amar in Bombay with the company’s development team of 15. The company also has a small office in New York.

Notably, the brothers were behind Chipshot.com, a Web-based maker of customized golf equipment that soaked up $50 million in venture capital during the Internet bubble, and crashed in 2000. Rajeev said that company was profitable briefly before it got caught up in spending most of its millions on advertising. Since, the two have gotten experience working at places like Microsoft and SAP. They’ve invited 100 publishers to test the product, and only twenty or so places remain, Rajeev said. I’ve put a few more thoughts about so-called “remnant” advertising networks in the voice post below.