Dailymotion, a Paris, France-based video-sharing site that’s a distant competitor to YouTube, has raised $34 million in funding, according to the Wall Street Journal.

The site, like many others, lets you share personal videos privately with friends or publicly with anyone. Like its competitors, people can also comment on each other’s videos, embed Dailymotion video clips in other sites, tag videos, view selected channels, etc.

However, Dailymotion has distinguished itself by tailoring its site to country locations. In France, it offers a French language site, and does community-building events there — for example, it months ago it started foster debate among French politicians, before YouTube started something similar here in the U.S. Dailymotion is neck and neck with YouTube for top ranked video site in that country. Dailymotion does something similar in Germany and other European countries. It lets people click on a flag icon at the top, for example the UK’s flag, if they want to view the site in English (see below)

One might call these sites also-rans compared to YouTube — YouTube has 61.77 percent of the US market, for example, while Daily Motion has 0.76 percent, according to Hitwise (table below). Internationally, the news is better for the company, as it was the ninth-fastest growing site on the web in May, with 28 million users, according to Comscore.

With these large cash infusions, these video sites may better described as also-runnings, not also rans. Video sites are expensive to run because they require the constant transfer of large amounts of video data between their own servers and end user’s computers — and need cash to pay for large amounts of traffic.

The hope of these investors, maybe, is that consumer web companies with solid traffic levels are still attractive purchases even if they aren’t market leaders. Many larger media companies are looking to establish their own online video brands, and have the money to buy their way into the market.

For example, Fotolog, a photo-sharing site not unlike Flickr (purchased last year by Yahoo) and Photobucket (purchased months ago by Fox/Myspace) was itself purchased last week by French media firm Hi-Media for $90 million.

New investors include Advent Venture Partners LLP and AGF Private Equity, which is a division of Allianz AG. Previous investors, Atlas Ventures and Partech International, participated in the round. 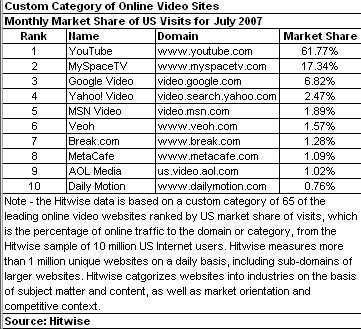