Facebook to launch people search in one month — Facebook will let search engines find and display very basic information from your Facebook profile, including only your name and the option to message you or friend you, it announced early this morning.

This way, if somebody searches for you on Google, this “public” page will show up — making it even easier for prospective employers to know where to find you on Facebook, and delve into your personal life. Of course, anyone else trying to find out abut you through Google now will know how to become your friend, which may help drive Facebook adoption even more.

The company says it will wait a month before letting this information loose for the search engines to find, so people have time to change their settings and keep their profiles hidden.

Business 2.0 to be officially shut down — As it proceeded to lop off the tech-business arm of its media empire, Time Inc., owner of Business 2.0, decided not to sell the magazine to Mansueto Ventures, owner of rival magazine Fast Company, reports The New York Times. The reason: it did not want to arm another competitor: The Business 2.0 brand and its 600,000 subscribers, in someone else’s hands could undermine its other business property, Fortune. Some Business 2.0 staff members will join Fortune, while most others reportedly will join other tech publications. 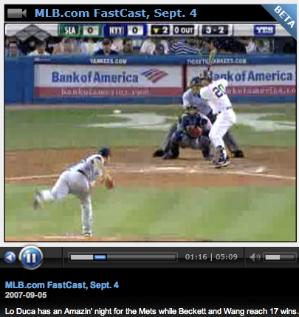 Microsoft releases Silverlight — After months of hype, version 1.0 of Silverlight, Microsoft’s multimedia plugin for developers has been released. It’s the company’s challenge to Adobe’s Flash online multimedia player. While Silverlight has gotten positive reviews from tech circles, it is trying to challenge Flash’s 90 percent-and-growing market share for multimedia players. Microsoft has made a number of major deals to promote Silverlight, including a video deal with Major League Baseball (screenshot left, with the sample here). 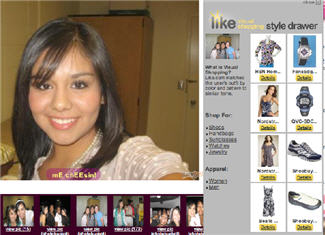 Rockyou’s integration of Like.com search results, needs work — Like.com, a visual search engine company that has changed directions since its founding, has integrated its search results into the slide shows featured on the popular photo site RockYou. See example at left. If you’re looking at a picture of a woman in a shirt, for example, Like.com will show you similar shirts and let you buy them. Or at least that’s the idea. It could use improvement, because the example given shows shoes and other items that have little resemblance to the shirt in the picture, and so Like is more likely to become annoying than useful. People don’t want to be distracted by advertising that isn’t relevant to them. In a Techcrunch piece, Like says its ads are getting $0.80 CPM, and that its sharing the revenue wtih RockYou. However, no word yet on the number of ad pages being served. (Via Techcrunch)

Palm scraps the Foleo its laptop-like companion to the Treo — The Foleo, from the beginning, had looked like a questionable project, and we were surprised it got as much publicity as it did. Who needs another device, when you’ve got a Treo and a high-powered laptop already? So Palm yesterday said it has canceled the project, and is taking a charge of “less than $10 million” for the work put into it.

NBC embraces Amazon after ditching Apple’s iTunes — NBC Universal canceled its contract with Apple’s iTunes, and instead announced its shows will appear on Amazon Unbox as soon as next week.

Synthasite, the Web site creator, gives out shares — The company is giving out 1,000 shares in its company to designers who create templates it can offer to users. It says its stock is worth $250,000, but its all very questionable, so participants beware.