SplashCast, which offers an online video player that can be used to share videos and other files, announced two more moves today in hopes of setting itself apart from the competition.

The Portland, Oreg. company has entered into a non-exclusive partnership with Columbia Records, opening up its platform for the company’s artists to set up their own channels. Regular users can also create channels based around Columbia’s artists.

Second, it has added new functions to its video player, most importantly a mobile component. Until now, users of SplashCast have been able to start their own video channels, which they can then integrate other content like pictures and RSS feeds into. A new feature, FanCast, will now allow mobile publishing. The channel’s owners will be able to use FanCast to send new content to the player from their phones, which could prove to be valuable for bands on the road. The fills a much-needed hole for SplashCast, which did not have a mobile feature like competitor Kyte.TV

The Columbia deal will be one of SplashCast’s largest successes to date. While the service has partnerships with smaller labels and subsidiaries, partnering with Columbia will give them the chance to prove their viability for professional media distribution over rivals like Kyte.tv and Springdoo.

The features aren’t all immediately available, with FanCast going first to the band Coheed and Cambria and live chat to Columbia artists. 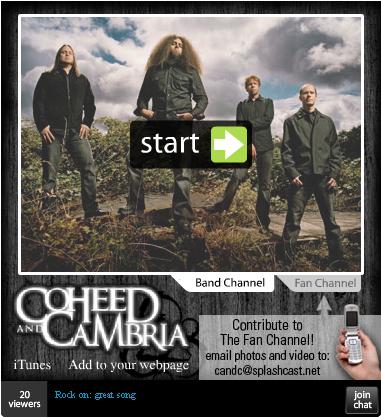