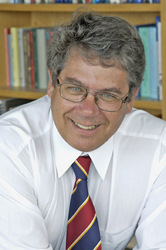 California’s $3 billion stem-cell agency, which has been without a permanent leader since the end of April, finally filled that void yesterday by naming Alan Trounson as its second president.

Hopes are obviously high that the widely respected Australian scientist, pictured at left, can bring some stability to the institute, formally known as the California Institute for Regenerative Medicine. A string of CIRM staffers, including former president Zach Hall and chief scientist Arlene Chiu, have departed or announced their resignations in the past several months, despite the fact that the agency is finally starting to get rolling with major grant programs for stem-cell science and research facilities. Although CIRM insists that these departures are individual decisions unrelated to any larger issue, it sure looks like the agency’s heavy responsibilities, lean staffing and Byzantine management structure are simply burning out its employees. (CIRM insiders have since confirmed that assessment in confidence. See my previous coverage here.)

Trounson certainly has a glittering resume and experience in both academia and business, having founded several fertility clinics and at least one biotech company, Singapore’s ES Cell International. (He’s currently director of the stem-cell and immunology laboratories at Monash University in Victoria, Australia.) With luck, his background will stand him in good stead in dealing with Robert Klein II, the strong-willed real-estate magnate who heads CIRM’s powerful oversight board, and who clashed with Hall several times during his tenure as president — even squabbling over who had the right to assign office space, according to a piece by David Jensen over at Wired News. Trounson, who will earn $475,000 a year, has already released a statement touting his intention to forge a “partnership” with Klein and the oversight board.

That said, the challenges CIRM still faces are significant, and it doesn’t help that Trounson apparently won’t even start his new job until the end of the year — and even then will likely work part-time while he winds down his involvement with his Monash laboratory. With all due respect to acting president Richard Murphy, it’s still likely to be a while before CIRM gets the steady hand on the tiller it appears to need so badly.