MyQuire is a another company that wants to help you better manage projects, and it’s offering bells and whistles some others don’t have.

The Mountain View company launches today at the Demofall conference in San Diego, Calif. It was co-founded by chief executive David Steinberg, who left Yale in 2005 to study philosophy at Cambridge. While managing a non-profit project from the UK, he realized how complicated online tools are for this sort of thing. With no technical expertise, he wrote an essay complaining about the market void. Somehow, it landed on the desk of some Microsoft engineers, who agreed to join Steinberg build a company.

The online site service is oriented around projects. You can organize projects, and trade them like cards. You can update them on the fly, share them with friends, manage to-do lists, chat live and more. There’s milestone management, and also storage features. Four thousand people have tested it.

Steinberg turned down a job offer at Goldman Sachs to start the company last year. Quickly building a prototype with the three guys from Seattle, he raised $2 million in backing from angel investors in May. He now has 12 people. He’s based in Mountain View, the rest are still in Seattle.

There are large incumbents in this area, including Microsoft’s Project, but they charge too much for them to achieve significant distribution, or more than a million users, says Steinberg (Project is $600 for example).

There’s Basecamp, of 37Signals, which launched about three years ago, and became an industry leader despite not having innovated much since then with the latest Internet features. Basecamp, however, was the first to distill the key components of MS Project, making a nimble online edition affordable to the masses. It has become very popular, boasting more than a million users. There are a dozen or so other copycat companies with nuances of this. Two others are Goplan and Huddle.net.

Microsoft recently released Microsoft Live, which had a number of project management features, but it did not include Word or Excel, which Steinberg believes will keep Live stunted. Microsoft fears undermining the revenues it gets from independent sales of those products, he said. There’s also Jive Software, but that serves large companies, and is not offered online.

MyQuire repackages the concept so that it’s like you’re in a room with people you’re working with – at the same time. Right now, MyQuire is online only (it does not work offline). It lets you view profiles of people, assign tasks and helps facilitate real meetings.

Steinberg says he believes people working online are moving toward having identities, somewhat like avatars in Second Life, where their physical presence is represented by a profile, and where others can talk with them and see them as they area really there.

The company has also worked hard to allow companies to integrate it with rest of their software applications. 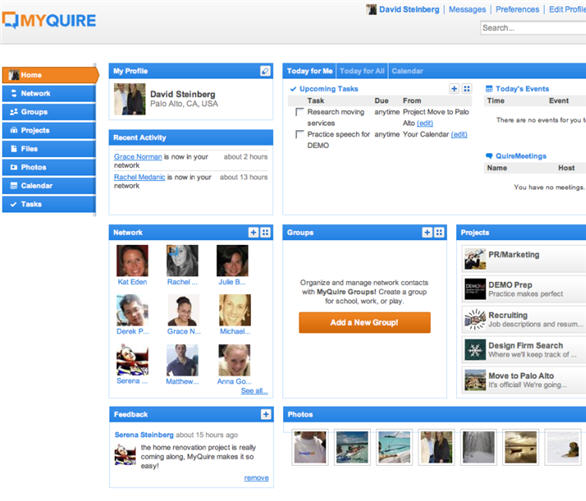 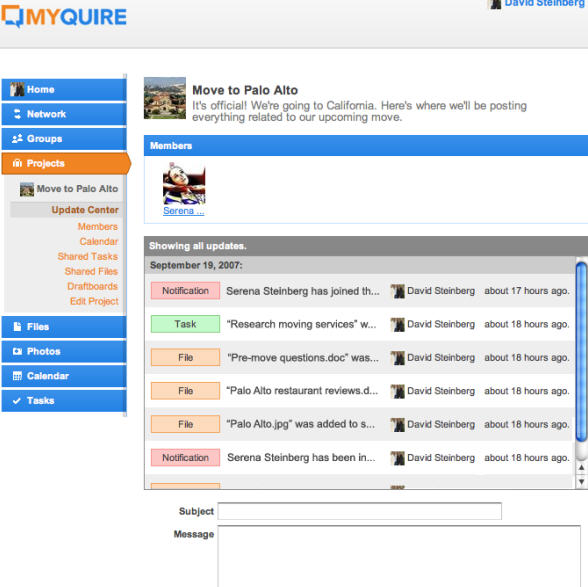