Here’s a summary of the latest action. See below for more:
1) In-Q-Tel invests in Forterra Systems, a private virtual world creator
2) Appfuel, another Facebook ad network, but with better ad targeting
3) AOL to spin out advertising arm?
4) Project Playlist, for sharing music playlists on other sites, raises $3 million
5) Four Interactive, a local business review site, gets $10 million from Valley VC’s 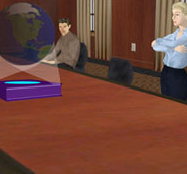 After running a scenario, the software lets its users get integrated reports that analyze participants’ actions to figure out what when right and what went wrong.

Besides government agencies, Forterra serves organizations in healthcare, education and other industries.

The amount of funding was undisclosed. The company said a “technology advancement agreement” was part of the deal, which sounds like customization for the needs of the US government. In-Q-Tel invests in technology companies that in some way further the interests of the US intelligence community.

In one example, if you state you’re a fan of the band the FooFighters on your Facebook profile page, then you might see an ad that shows you information about the band’s latest shows or where you can buy band t-shirts. GigaOm has more.

The company has raised an undisclosed amount of angel funding.

In other Facebook news, chief executive Mark Zuckerberg has been spotted in Seattle, on his way to talk to Microsoft — possibly about selling them some Facebook shares (our previous coverage).

Project Playlist, for sharing music playlists on other sites, raises $3 million — Another social music site with a widget, the Beverly Hills company lets you create, embed and listen to playlists on MySpace, Facebook and other social networks; PEHub reported the funding, although no investors were named.

Four Interactive, a local business review site, gets $10 million from Valley VC’s — The Bangalore-based company owns AskLaila.com, a Yelp-like site in India where you can read others’ reviews about local businesses and add your own. It includes proximity search, SMS notifications and other services. More here.