“Platform” has become a buzzword this past year. With more and more business going online, the big Internet companies want to put logs in the fire, and make their living rooms cozy: Like never before, they’re providing third-party software developers support services and access to its users. The most prominent example is Facebook, which lets developers build applications and make money freely directly within Facebook. 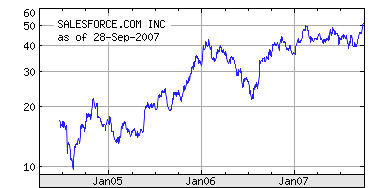 Another, older company that has helped pioneered this model is Salesforce. Tomorrow, Bay Partners and Bessemer Venture Partners will announce a fund of at least $25 million for startups that develop applications on Force.com, Saleforce‘s software platform to help businesses to build their own applications and host them with Salesforce (our previous mention here).

As you’ll see from Saleforce’s stock price since going public three years ago, its story has been rewarded by Wall Street (image via Yahoo Finance). It’s stock is at an all-time high.

The two venture firms believe startups that develop applications using Force.com may be able to provider cheaper, easier-to-use applications to larger businesses, especially to mid-sized businesses that get ignored in favor of Fortune 500 client companies by business-software giants such as Oracle and SAP. Many of these mid-sized businesses, often defined as having between 50 and 500 employees, instead build their own software or do without.

Bay Partners has already bet on Facebook’s platform, announcing AppFactory in July, a program for providing seed-stage funding to startups that build Facebook applications (our coverage).

Bay Partners is optimist about Force.com because some of its portfolio companies have already used Salesforce’s AppExchange to connect with clients and grow their revenue streams. One such company is Eloqua, a startup that provides software that helps salespeople and marketers in a company coordinate their efforts to gain customers — it is making more than $10 million in revenues, the firm tells us.

Salesforce will advise the two firms on investments, providing background information and assistance with due diligence.