Very few people like to go shop for clothes by themselves. It’s a social experience: Always better with the input of friends.

So it is online. Until recently, online shoppers had to go solo, but lately, several sites have emerged to enable you to shop socially, bookmarking products and browsing the recommendations of your friends and people with similar tastes.

There is no clear leader in the market, and there’s lots of interest. The latest is Boston’s StyleFeeder, a fashion-oriented social shopping site which has just raised a $1 million round of funding.

StyleFeeder’s $1 million is a relatively small amount, considering that ThisNext, one of StyleFeeder’s most significant competitors, has already raised $3.5 million, and is now looking to raise another $7-10 million. StyleFeeder’s founder says that his company can compete with less cash in the bank. He says that his operation can remain lean for now because one of the biggest hurdles — creating a differentiated technology — is already out the way. He found and recruited an MIT engineer who had built a powerful algorithm to earn his PhD.

Most of the social shopping sites rely on users to bookmark and tag products. They then match product to product based on these tags. StyleFeeder is more sophisticated. While users do have the option to tag the products they like, it’s not necessary for StyleFeeder to work.

Its technology functions somewhat like Last.fm’s collaborative filtering engine. Last.fm looks at which songs and artists you most frequently listen to and pairs you with people liking similar music, along with the music they play. Similarly, StyleFeeder analyzes which products are most frequently recommended together and matches you to people and products. This process typically requires resource-intensive number crunching. StyleFeeder’s algorithm does it in real time.

The result, which I found to be impressively accurate, is a set of fashion recommendations coordinated with your personal style. I bookmarked some things I like, including iPods, Diesel jeans, and Puma sneakers, and StyleFeeder suggested a couch with a built in television (see below), which I now want. It also showed me people who liked goofy T-shirts, and I’m a big fan of those as well. StyleFeeder’s recommendations are more refined than the “people who bought this also brought that” system deployed by Amazon and Aggregate Knowledge. This is partly because it’s focused on a much more narrow range of products.

The company also has a Facebook application with a respectable 120,000 users. 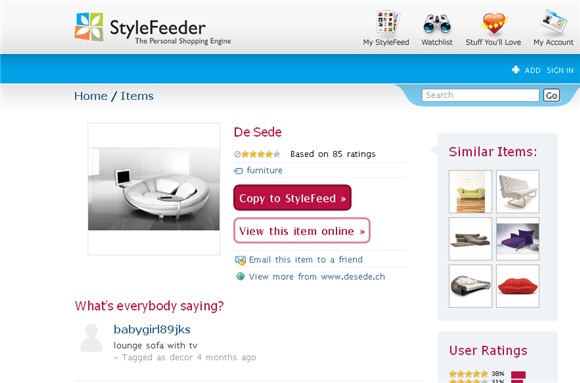 The funding comes from Highland Capital Partners and Schooner Capital.