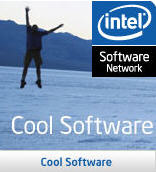 Called CoolSW (it stands for “cool software”), the site looks much like Digg, the popular site that lets users rank technology-oriented news by voting on whether they like it or not.

CoolSW is different because it focuses solely on business ideas. It’s designed to draw on the opinions of the wider developer and entrepreneur community, to help Intel keep track of “the next Google,” as Steve Santamaria, the Intel employee overseeing the project, puts it. It allows voting and comments, like Digg.

For now, it is focused on software ideas, but could be expanded to include other ideas, too.

Intel is famously paranoid about tracking the next ideas. Intel’s chips are inside of all sorts of products, from PCs to Web servers and medical devices. However, Intel, the world’s largest chip maker, faces numerous competitors, with Silicon Valley rivals like AMD constantly nipping at its heels. Intel wants it chips to be compatible with popular products from the get-go, so that it doesn’t lose its leadership position. By learning of companies early, it hopes to strike up conversations with entrepreneurs to ensure that Intel chips can be used to power their products. Intel has also ranked also one of the largest investors in companies. Its investment division, Intel Capital, has in past years made more investments than the largest venture capital firms.

The project began internally last year, when Intel began soliciting views from its employees about the hottest software companies. Not only were professionals from Intel Capital, Intel’s investment arm, contributing their views, but so to were Intel employees from India, Japan and China. They saw companies in foreign markets that Intel employees in the U.S. were missing. With Intel moving to embrace fast-moving Web 2.0 applications, Santamaria’s team decided that it could use the help of the wider external community, too. Intel’s internal site had 500,000 visitors, and 1.4 million page views on 80,000 contributions. One company that came to Intel’s attention through the effort was fast-growing email provider Zimbra, recently acquired by Yahoo. Intel met with Zimbra, and consulted with its management team so that Zimbra could work well on Intel’s chip platform.

See screenshot below for what the site looks like. The most recent submissions are ranked at the top of the site, but you’ll see that the most popular is GrandCentral, the company bought by Google, and which offers a way to channel communications to a single phone number. It is closer to the bottom of the page, but has the most votes.

Like Digg, CoolSW has several categories too, including digital home, mobility and enterprise and health. 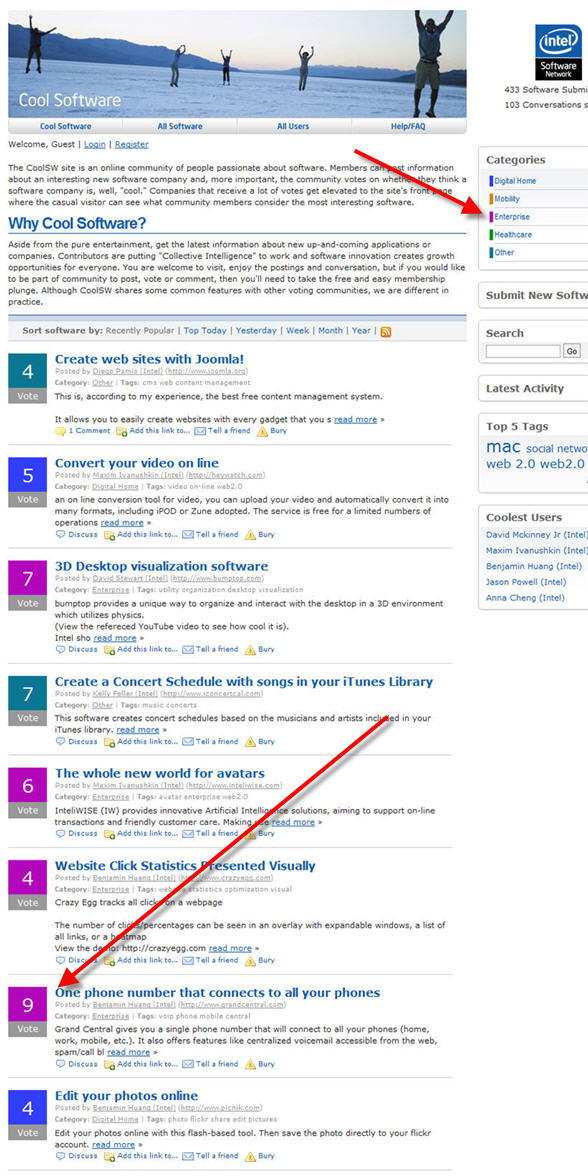