Forsee forced out as Sprint struggles to compete — Gary Forsee, the chief executive who masterminded Sprint’s merger with Nextel in 2005, has gotten the boot following speculation by the Wall Street Journal and USA Today.

Psst, we’ve got one idea for Sprint: Open networks spur innovation. Google’s Andy Tian explained this recently, saying it is a driving force behind China’s booming mobile market. Perhaps the new Sprint chief executive, once chosen, might want to consider turning Sprint’s mobile network infrastructure into an open platform for third-party mobile applications here in the US?

The Sprint-Nextel merger, completed during a period of frantic consolidation in the mobile carrier industry, was intended to give Sprint a strong presence in both the business and consumer markets. Instead, the combined company’s business faltered as customers fled to other carriers. Sprint’s current troubles could delay its ambitious WiMax project with Google. Mobile social mapping service Loopt (our coverage), one of the few startups that has managed to land a distribution deal with Sprint, tells us the company still feels “very good” about the partnership. (Photo, above, via CNET)

Google “Gphone” details emerge — The New York Times reports that Google, whose stock just passed $600, has been working on its rumored mobile phone project for a full two years. The article notes that that Google will probably not focus on creating a revolutionary device like the iPhone, but will aim to create an open-source, Linux-based alternative to Windows Mobile and get it onto as many handsets as possible. Google is likely to encounter resistance from the carriers, especially Verizon, whose tussle with Google over wireless spectrum in the US gets more boisterous. But Google sees the mobile market as one of its biggest growth opportunities, and won’t go down without a fight. (Image via NYT.)

IBM and Google invest in cloud computing education — As cloud computing, or the practice of scaling processing across an interconnected grid of computers, gains popularity, companies from Amazon to Microsoft have latched onto the concept. Part of the problem with its growth is that there are more potential uses for cloud computing than there are skilled engineers to run the networks. Now Google and IBM have announced they will jointly invest up to $30 million in equipment and training at six top universities, giving themselves a dual benefit: The appearance of altruism, and first shot at hiring the brightest graduates.

Google gets heat for allegedly disrespecting its elders — On the other end of the spectrum, Google is back in the news for (allegedly) trying to dump its older employees. The decision by a Santa Clara County judge to dismiss the age-discrimination lawsuit of former Google executive Brian Reid has been overturned by the Sixth District Court of Appeals in San Jose. The court declared that a jury should hear the evidence, which includes a statistician’s study finding that older employees at the company consistently receive lower evaluations and smaller bonuses than their more youthful counterparts.

Reid claims colleagues referred to him as an “old guy,” and “fuddy duddy,” and says he was fired for not being a “cultural fit.” Whether or not this constitutes age discrimination is up to the jury to decide, but the idea doesn’t come as a surprise to anyone; older employees have long known they’re an endangered species at tech outfits. 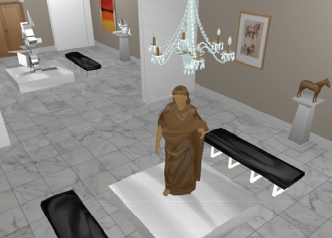 Facebook app offers virtual Facebook rooms — Scenecaster, a company that lets you create 3D virtual rooms and embed them on social networks, has released a Facebook application. It lets you create a virtual room in Facebook and add virtual objects from Scenecaster’s catalog of virtual goods. Along with Acebucks (our coverage) and Zuckerbucks, two virtual currencies on Facebook, this is another example of third-party developers adding virtual-world features to the social network. (Screenshot via Scenecaster.)

Proximic takes on Google search and Adsense — Proximic, which launched at the beginning of the month, searches the web based on the relationships of words to each other rather than the words themselves. The German company has been showing its software off around Silicon Valley to positive reviews, according to the San Jose Mercury News.

The problem with Google’s contextual search and advertising technologies is that it uses particular keywords, which tend to miss the overall meaning of an article and instead deliver ill-fitting search results or ads. Proximic indexes the web, like other search engines, but uses the “pattern proximity” of all of the words on a page to establish a baseline of “normality,” and thus figure out how words relate to each other. For example, a Proximic search on an interesting research project that has assembled a bunch of microrobots in an ant-like colony will find a whole range of other web pages that deal specifically with similarities between robots and ants (see the company’s screenshot, below).

Proximic currently offers a widget for publishers, so they can display relevant information from around the web on within their sites, and a Firefox browser plugin that displays similar pages. Because it relies on patterns, not words, it can be used in any language. Scoble has a good video interview with the founders here. Google did not respond to a request for comment on what its doing in this area. 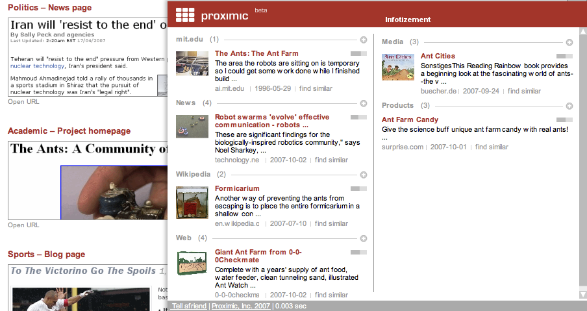 Grayboxx says it’s better on local search/reviews — Grayboxx (our coverage) says it has found a way to improve on Google and Yahoo’s crummy local search results, and provide better reviews of locales than Yelp. Grayboxx, which began opening up to a few communities this summer, today made the service available to 100 more small cities around the U.S. The company collects local data — purchase information at local retailers, online restaurant reservations, and so forth — to create its own rankings of how local people value local businesses. For example, repeat online reservations at a local restaurant by many local people will increase the restaurant’s ranking. That’s right: No user-generated content gets created on this site. It’s hoping to appeal to middle America, as companies like Yelp struggle to move beyond their urban base of reviewers.