For some industries, $1 billion isn’t much, but when it comes to virtual worlds, it’s a large enough number to make people blink.

Of course, that was the intention of releasing a study touting the number. Virtual Worlds Management, the company behind both the study and the Virtual Worlds conference wrapping up today in San Jose, knows how to create buzz: Make an announcement that has little to do with reality.

Here’s the real announcement: Virtual world companies took an admirably high $200 million in investment over the last twelve months, and that figure is likely to continue growing in the future.

Split between 33 companies (full list below) the investments represent the growing potential of virtual worlds. Startups ranging from developer’s paradise Areae (our coverage) to sketchy virtual property site Weblo (our coverage) are all banking on users latching onto the idea of having a virtual life.

Despite the failure of much of the hype around Linden Lab’s Second Life to come to fruition, advancing technology and innovation makes it a near-certainty that a virtual world will soon be a blockbuster hit. the question is which ones will make the grade.

And what of the remaining $800 million? It was invested in two companies. The smaller portion, $100 million, was paid by Intel to buy Havok, a physics engine that gaming companies will likely find more useful than their virtual world cousins will. The remaining $700 million was Disney’s acquisition of Club Penguin.

Counting Club Penguin is a stretch: The site could as easily be called a social network for tots as a virtual world. (Virtual South Pole, perhaps?) Assuming it were counted as a virtual world, $700 million is still counting the penguins before they hatch: Half the amount requires Club Penguin to meet high earnings marks by 2009.

We’d like to give them VWM the benefit of the doubt, but despite the obvious reliability of an enormous audience of seven year olds, we prefer to stick with money that’s actually been paid.

The full Virtual Worlds Management list can be seen below, or in more detail here. 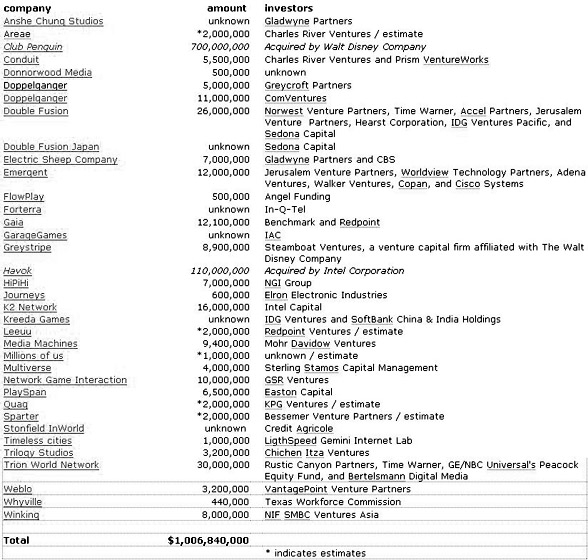