Another Googler goes to Facebook, to head its developer platform — Benjamin Ling, a high-ranking Google employee who has most recently led its e-commerce effort, including online payment service Checkout, is leaving for Facebook, reports Netly News. Facebook has been successfully recruiting out of Google for months, notably stealing former YouTube chief financial officer Gideon Yu (our most recent coverage) earlier this summer.

Facebook traffic apparently took a dip last month — [Update: Are we the only ones tired of talking about Facebook?] Comscore will soon release a report showing that the number of unique visitors to Facebook decreased 9.3 percent to 30.6 million in September from 33.75 million in August, according to GigaOm’s early look at the data (see table); Pageviews were also down 3.8 percent. 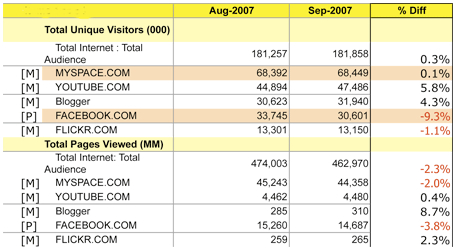 Some wonder if it is Comscore that is having problems collecting accurate data although Facebook itself has been citing Comscore for much of its publicly available traffic statistics.

Madonna latest in string of musicians to ditch record labels — The ever-popular and controversial artist is about to leave Warner Brothers Records for a deal worth around $120 million with concert promoter Live Nation, reports the Wall Street Journal. The money is in live performances and merchandise, not the music itself, as TechDirt has been pointing out for years. Other major artists, such as Radiohead, have also announced distribution deals that cut out the labels.
Mozilla preparing mobile web browser, may improve mobile web user experience? — Mozilla, the nonprofit foundation that leads development on open source web browser Firefox, has announced detailed, long-term plans to develop an open source web browser designed for use on phones and other mobile devices. The move dovetails with many other efforts to develop open source mobile software, such as Google’s rumored Linux-based mobile software, as gadget blog Crave points out.

Mixx.com launches to let publishers give users relevant content — The service is yet another recommendation engine, offering up content, including news stories, video and photos, depending on a user’s interests and locations. Mixx has signed deals with USA Today, Reuters.com, The Weather Channel, Kaboose and uclick Comics. It is owned by Recommended Reading, of McLean, Virginia. It has raised $1.5 million round of funding, in a round led by Intersouth Partners.

CBS acquires gossip site Dotspotter for $10 million — Valleywag got the scoop here.
What happens when a wiki gets old? — The grandaddy of them all may be revealing the answer. A study by a Wikipedia user of the site’s stats, which have been unexamined for a year, shows that edits and new account creation have both fallen from their peaks, by 20 and 30 percent respectively. The unanswered question is whether the drop in traffic is a result of the wiki fad wearing off, or simply because the online encyclopedia has reached a critical mass of information, leaving fewer opportunities to add more.

Will Crescendo Ventures be saved? — The Silicon Valley firm has been on the ropes for some time, and we wrote last year that it may not be able to raise another fund if it didn’t produce any results soon. (Scroll way down to see our original story about the firm; apologies for the buggy page). Yesterday, one of its companies, Compellent, finally went public, and it saw a 77 percent increase in its trading price in the first hours of trading — the second best performance this year. The company is unprofitable, a network storage company among a lot of competitors that have also filed to go public, or already having gone public — all losing money. The company is based in Eden Prairie, Minn., and its technology serves small and mid-sized customers. We’ll see if it’s enough to allow Crescendo to raise another fund from its skeptical investors. Crescendo owns 21 percent of Compellent, now worth in the hundreds of millions of dollars. But regulations force the firm to wait six months before it can cash in on the investment. Partner David Spreng did not respond to a request for comment.

“Virtual TV” network raises $8M — The secretive Israeli company RayV has raised $8 million in a second round of financing from Accel Partners, according to Globes. One founder, Oleg Levy, was previously an executive at Kagoor, which was acquired by Juniper Networks. It says it wants to offer a new way for “consumers to find, review, and talk about local businesses. A cross between a web-based social community and an online business directory, RAYV is where people go to express their opinions on any type of local business and get recommendations from a trusted source – their peers.” Accel Partners declined comment.
Industrious Kid to part ways with Steamboat Ventures — Industrious Kid, the Oakland, Calif. company that raised $6.5 million last year to build its site, imbee.com, as a social network for kids, is going to try to buy out one of its investors, Disney-affiliated Steamboat Ventures. Apparently, the two sides have differences in strategic direction, and so Steamboat wants to get its $2.5 million back. The companies didn’t comment on the specific reasons.
SendMe, a San Francisco mobile entertainment services company, acquires Mbuzzy — The terms were undisclosed. Mbuzzy is a four-year-old mobile start-up based in San Mateo, Calif., that lets friends share content with each other over the phone, and claims 500,000 users. SendMe previously acquired Vector Mobile, publisher of solow.com.